Beneath the Planet of the Apes vs. The Adjustment Bureau 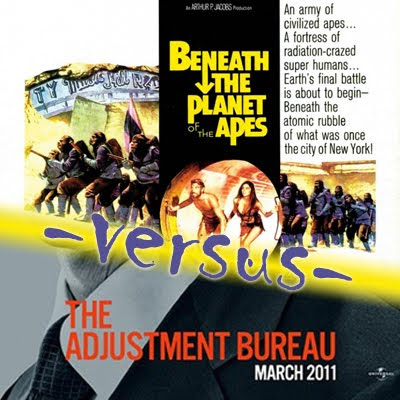 Beneath the Planet of the Apes: Boy, they just don’t make movies this bad. It takes either determination or massive bad luck to produce a picture this awful. Ridiculous dialogue, unbelievable action and a plot so thin, it would lose to rock. 1 bug.

The Adjustment Bureau: This was one of those movies that I didn’t see coming. I thought it was going to be another Pelican Brief-type of movie and then it turned all Green Mile on me. Which was good. Then it turned all You Can’t Buy Me Love at the end. Which was less good. 6 bugs.

Title: The Planet of the Apes series kind of boxed themselves in with the already long title to start so that every subsequent title has to be way way too long. (Point, Bureau 0-1)

Better Turn: I enjoyed the turn of Beneath the POTA when they did it the first time. (Point, Bureau 0-3)

Better Ending: The Adjustment Bureau is better If you stop it 15 minutes from the end and just make up your own ending. Beneath the POTA is better if you accidentally scrape a razor blade across the surface of the DVD. Or your eyes. For seemingly no reason, Charlton Heston blew up the earth on his death bed and tried to replicate the emotion from the end of the first movie, but without purpose or substance. But at least the movie already sucked. (Point, Beneath the POTA 1-3)

Better Message: Some movies don’t try to have a message. Beneath the POTA did. And it was the same message as the first one in fact, but delivered in a month-old tortilla shell which cracks through the middle. (Point, Bureau 1-4)

Better Acting: I suppose that it was maybe difficult to try to put yourself in the place of mutant human underground survivors in an ape world a thousand years in the future. And who the hell am I to say that this isn’t how they would act or talk? Despite only appearing in the film for the first and last 5 minutes, Charlton Heston jumped off this ship one movie too late. (Point, Bureau 1-5)

More Creative: The first half of the movie was almost exactly the first movie condensed into an hour, but with a different, much shorter leading man. Then the wheels really fell off when they met the mutant survivors of the alleged nuclear war. (Point, Bureau 1-6)

Poster: Maybe it was a sign of the time, but I’m pretty sure there were no such things as graphic designers back in the early 70s. (Point, Bureau 1-7)

Watch again: Not a chance I will ever watch that awful movie again. There’s a very good chance I’ll watch the first hour and 20 minutes of The Adjustment Bureau again. (Point, Bureau 1-8) 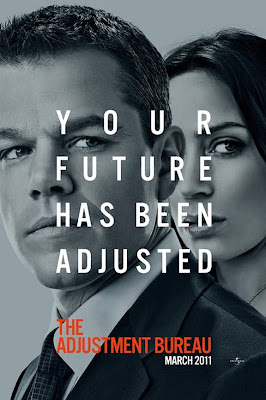