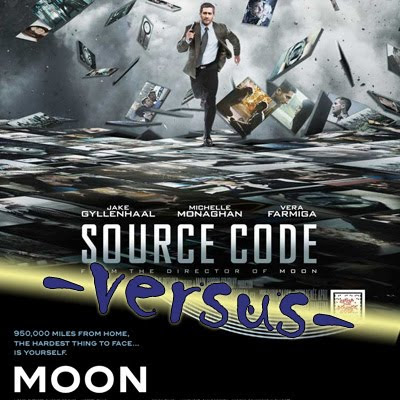 Bout # 15: Netflix told me I’d probably like Source Code. The extra $2/month is already paying dividends. I liked Duncan Jones’ second movie so much in fact, that I immediately watched his first movie, Moon. And I’ve realized that the comedy with which I write these things is inversely proportional to how much I liked the movies. So… sorry.

Source Code: Rarely, likely never, has a movie come along that has hit virtually all of my obsessions as this has with such exactitude. It combines Quantum Leap with actual quantum physics. It’s Groundhog Day meets Déjà vu meets Back to the Future, or at least the Multiple Worlds theory from the second one. And it had a 10-minute tutorial on the science behind some of the theories presented in the movie for wannabe geeks like me. If you want a movie that makes you think, put this on your Netflix queue and hit “Move to position #1.” If you don’t, watch Basketball Wives. 10 bugs.

Moon: Damn, now this came out of left field too. I suspected it would be good based on Source Code, but it was like REAL good. The movie took place entirely on a space station on the moon – possibly called a moon station I suppose – with a few scenes outside on the actual moon. The movie starred Sam Rockwell, which is a risky move in and of itself, let alone the fact that he was the only person in the movie AND they decided to clone him several times over and have them in the same scene. But it worked. Phenomenally well. 9.5 bugs.

Title: I don’t have anything against movie titles that only name the movie so people will remember what it’s about, except for the fact that that’s a lie, e.g. Transformers, Bad Teacher, Bridesmaids. (Point, Source Code 1-0)

Funnier: Not much of a contest, honestly, despite the Russell Peters cameo. Sam Rockwell is a pretty funny guy to start with and the situation he winds up in here makes for some legit humor. Like the kind you can’t find in Big Mamma’s House. Or so I’m guessing. (Point, Moon 1-1)

Better Turn: Tough one. Both very strong turns. Like Talladega. Or so I’m guessing. In Sorce Code, Jake Gyllenhall finds out he’s just a subconscious and nothing he can do can change the past he’s living through. In Moon, Sam Rockwell finds out he’s just a clone and his life expectancy is only three years. And he finds a room in the basement of the moon station with a limitless number of Sam Rockwell clones. Yeah, that was pretty powerful. (Point, Moon 1-2)

Better Ending: Again, very strong endings for both of these movies. Like Vegas Strip Clubs. Or so I suppose. In Source Code, Jake does a couple things along the way, but the long and short of it is that he creates an alternate world from the one that exists in real time to the scientists, bunking up the space/time continuum, according to Doctor Emmitt Brown. In Moon, Sam – well, one of him – decides he’s actually going home, something they have promised him, but have been disintegrating his clones instead. Point goes to the excellent application of the Multiple Worlds, quantum physics theory. (Point, Source Code 2-2)

Better Message: Well, both movies likely existed as entertainment more than movies with deep messages, but I’ll give the nod to the movie where the main character tries desperately to save these same people over and over, even though these people already died. In one reality. Just watch the movie. (Point, Source Code 3-2)

Better Acting: Not that Vera Farminga and Jake Gyllenhall didn’t hit it hard on the sweet spot, especially with such a wacky premise, but Sam Rockwell made you believe there were at least two of him. Like Charlie Sheen does on a typical bender. But likable. And believable. (Point, Moon 3-3)

More Creative: It’s going to be hard for me to pick anything against Source Code here, what with the short-term memory tie in with the quantum physics and multiple worlds theories. Certainly, no movie wins the geeky creative award over this one. (Point, Source Code 4-3)

Poster: I really wanted to give this to Source Code. Moon is just Sam Rockwell in front of a Moon-looking thing that’s more like a stare-o-gram. Source Code is so much more active, with the tiles Jake is running on falling away into the air. But he’s carrying a gun. Which is misleading and easy. And the phrase “Make every second count” is the tagline. About 10 minutes in a marketing meeting and I’m sure somebody could have figured out something better. Proof: You only have seven minutes. But how many times do you have it? No, it’s not perfect. But it’s better. Too many points off of Source Code. (Point, Moon 4-4)

Watch again: I hate when it comes down to this, because it’s the most subjective category. They’re all obviously my opinion, but this doesn’t need to have any work shown. Case in point. (Point, Source Code 5-4)

Overall: It was a lot easier to judge between two movies that I like than two movies that I hate, I’ll grant you that. And I’m glad I’m not at a point in this little game where I intentionally watch crappy movies after good ones just so they don’t get knocked out in an early round. I’m sure Moon would have done quite well against a few other winners. Like Escape From the Planet of the Apes for example. Winner: Source Code (5-4) 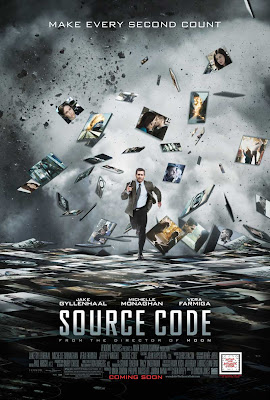