Double Feature Duel:
Conquest of the Planet of the Apes vs. Traitor 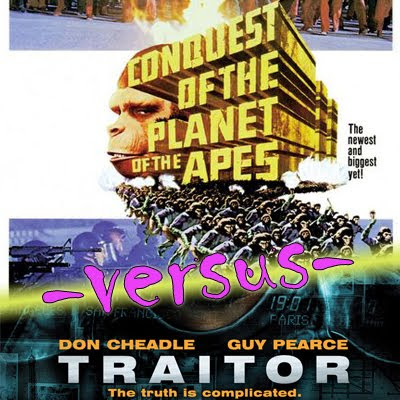 Bout #16: Foolishly or not, my completionist need to finish what I started sucked me back into watching the next installment of the original Planet of the Apes series. And yes, I used the word “sucked” with intent.

Conquest of the Planet of the Apes: Fast forward to 1991. The future. Where the government has 19-inch color televisions in almost every room. All the cats and dogs had died off and apes were being raised as water-pouring slaves as foreshadowed in the last movie. Until the chimp from the future stood up and said “No!” He taught the other apes to think and banded them together to attack the humans using their gorilla war tactics. And that ridiculous fight scene lasted the entire second half of the movie. 3.5 bugs.

Traitor: This movie, conversely, had the most disproportionately long first act. At 1:20 into the movie, finally something happened. It was a lot of boring shit to sit through wondering what the heck the point was. But then it got good and twisty as a movie called Traitor should. But I don’t blame you if you didn’t make it to that part. 5 bugs.

Title: Well, my two pet peeves have finally crashed head on. Ridiculously long movie title vs. a movie title that just says what the movie is. But I guess Traitor is a little more obscure than most of those titles, as you don’t know what he’s really traiting from. Or if it’s even him. And I’m tired of the POTA titles now. (Point, Traitor 0-1)

Better Turn: The turn of Traitor was very good. I about leaped out of my seat and went “Holy shit!” But that was mostly because nothing happened in the first 1:20 of the movie and I was surprised. The first act was WAY too comparatively long. Like the praying mantis of movies. (Point, Conquest 2-1)

Better Ending: And then the Planet of the Apes ending was not only ridiculous, but confusingly long. I really just kept waiting for the next scene which never came. The entire last 45 minutes of the movie was just a bunch of scenes of apes beating up humans in stupid, unbelievable ways. Like throwing a net over humans that completely incapacitated them. This works on fish and only fish. (Point, Traitor 2-2)

Better Message: Well, Conquest takes a different angle at slavery and torture and I guess cruelty to animals, but it’s packaged in such a far-fetched premise. (Point, Traitor 2-3)

Better Acting: I don’t like the use of Jeff Daniels in this role. Much like Woody Harrelson’s character in 8 Pounds, it’s better off if we don’t know this is a character that will come back. But that doesn’t mean it wasn’t acted well. I am started to notice Guy Pearce is more than just a hot bod with tattoos all over his chest and knees. (Point, Traitor 2-4)

More Creative: Unfortunately for Conquest, the heavy lifting was already done in the previous movie. This film was one big long horribly scripted apes vs. humans combat. (Point, Traitor 2-5)

Poster: Well, there isn’t really anything spectacular about the Traitor poster, but at least it doesn’t claim to be “The most awesome spectacle in the annals of science fiction!” And that’s not even a quote from anybody. Also on the poster: “The newest and biggest yet!” complete with exclamation point. It’s like their trying to sell me laundry detergent. (Point, Traitor 2-6)

Watch again: Well, if I watch either of these again, I’ll have to either fast forward through the first half or the second half, depending which I watch. Or maybe do a few Sudoku puzzles or something. But there’s a much better chance I’ll try to pick up anything I left behind in Traitor. There was nothing left behind in Conquest. (Point, Traitor 2-7)

Overall: I liked the 1st and the 3rd films in this 5-film series, but boy do the even numbers suck ass. Winner: Traitor (7-2) 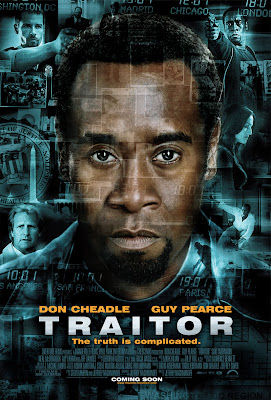