Well, the Eagles season is all but officially over. I really enjoyed the scenarios they spit at us on Thursday night about how if we win out and the Giants 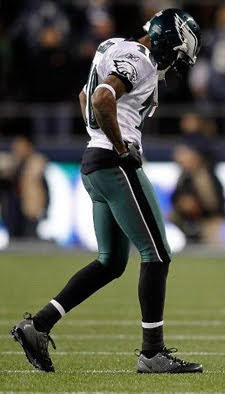 beat the Cowboys twice and lose two of their other three games that we could get into the playoffs. Right before we proceeded to get our ass beat by the third NFC West team this year. It’s fitting that the guy who coined the term “Dream Team” was forced to eat those words on national television himself with his four picks. But I don’t blame him nearly as much for the loss as DeSean Jackson. He mistimed his catch on two balls in the end zone against the Patriots. He tried to wait until he had a contract to secure the ball.

Seriously, what a quitter. I can’t wait to not have to root for him anymore. During the Seahawks game, he ran his routes downfield and rarely even looked back to Vince for the ball. I can understand if you’re not gonna block for your running back. That has more to do with being a coward than a quitter. But now he’s not even looking for the ball. I hope he goes the way of Eric Lindross and T.O. and we just sit him there to rot for the rest of the season. Then he can be someone else’s cancer. But his little pouty face and bullshit attitude will likely cost him millions of dollars in the long run. And that is what I tell myself to sleep at night.

In other news, there is finally a white cornerback in the league for the first time since Jason Sehorn. And he’s actually a college quarterback turned wide receiver. His name is Julian Edelman and of course he plays for Bill Belichick. Because he has the ability to take unknown players and put them into the right position to help his football team be the dominant team it has been for the last decade. Which is the opposite of what the Eagles do.

Bullshit Call of the Week: I don’t watch a lot of European soccer because I have respect for myself. But what Jerome Simpson from the Bengals did last week against the Browns was Vlade Divac ridiculous. Professional wrestlers were taking notes. John Kerry called him afterwards to congratulate him. Then he rescinded his compliment. The ref did exactly what you’re taught not to do and, having only seen a small part of what happened, filled in the rest of the information in his head, thus rewarding Simpson for his Jack Nicholson class acting job. And the NFL didn’t fine him at all. That’s even more bullshitier than the ref’s original call.

Bullshit GM Move of the Week: Let’s say I invite you to make me dinner. You have a favorite spatula that you’re comfortable with so you bring it. I don’t let you in the door until 10 minutes before the guests arrive. Then I take your spatula and throw it out the window. Instead, I hand you a spork with two missing prongs and a car tire. Then I tell all my guests that our shitty dinner is your fault. Who are we? Yes, you’re Jack Del Rio and I’m Wayne Weaver. And Luke McCown is the car tire.

Teammates of the Week: I saw a highlight that showed Devin Hester back to return a punt and figured I would hear the familiar chalkboard-like shrieks of “Why does anybody punt to him” by the formulaic talking heads on SportsCenter. Instead, I saw a punt travel 80 yards IN THE AIR! Holy crap. And no, nobody was able to down it, so it only netted 60 yards. This came on the same day that Janikowski kicked 6 field goals to beat the Bears. Make fun of kickers if you want, but there’s a reason they have them in the game. And there’s a reason they’re the only two players left over from their 2003 AFC champion team.

Karmic Play of the Week: Steve Johnson caught a touchdown pass and mocked Plaxico Burress by pretending to shoot himself in his literal leg. Then he shot himself in the metaphoric foot later, costing his team the game. Karma is a pretend gun, Stevie.