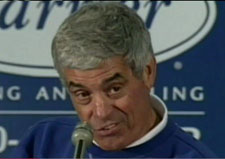 Nine of the 12 playoff berths have already been claimed. Seven teams still have a shot at the other three spots. I have decided who makes it to playoffs based on what would be funniest.
Bengals: The Bengals have been the league’s punching bag for the last thousand years. This year began with Chad Ouchostinko leaving for the Yankees, T.O. falling into obscurity, Cedric Benson getting sent to jail and Carson Palmer pulling an Eric Lindross and refusing to play. Paul Brown responded by saying “Fine. Then you can rot on the bench.” The team responded by going 9-3 in games not against the Ravens or Steelers and have two of the hottest rookies northwest of Charlotte. If they can pull off a victory against the Ravens this week, they will be the third playoff team from the AFC North and will play the life-support Texans in the first round. And it’s commonly accepted that any year the Bengals win a playoff game is a league-wide mulligan, which is good news for the Eagles season. Result: In
Giants: They’ve already beat the Cowboys once and it would be funniest if the Giants made it in over the Cowboys, but ONLY if they play to a 0-0 tie on national television. Both teams have been known for their late season collapses, so a finger will be pointed either way. But I’d rather Dallas have to live with that 12-point collapse to the Giants in Week 14 with under 4 minutes on the clock for the rest of the off-season. And that will happen only if they tie. But it would have been funniest if they had lost to the Jets last week and let the Eagles slip into the playoffs. Oh well. Result: In (but with a caveat)
Jets: The sheer mathematics of them getting in alone would make them an amusing pick. But I think it would be much funnier to see what Rex Ryan says when his yearly pre-season Superbowl guarantee dies a humiliating 8-8 death with a three-game losing streak to close the season. Of course, it would be funniest if Cincinnati, Tennessee and Oakland all lost, but then the Jets lost to Miami. That’s the post-game presser I’m really hoping for. Result: Out
Dallas: Of the two late-season-collapse punching bags, the one with the big blue star on it makes a funnier sound when you hit it (see Giants). Result: Out
Oakland: The Raiders are about to set a record for penalties and penalty yards in a season. Their franchise quarterback in Jason Campbell got injured early in the season and it looked like Kyle Boller was going to be given the keys to drive them straight into the iceberg. Then they pried Carson Palmer away from Paul Brown by overpaying by a ton and their loud-mouthed, no-holds-barred owner died shortly after. This comes after a season where they went 6-0 in their division and still couldn’t make the playoffs. I can’t think of a team in the league that would be funnier to see in the playoffs. Result: In
Denver: I’m torn on this whole thing. I understand how important the quarterback is to a team, I really do. But to not even mention any of the other 52 players for three months? He plays so awful for the first 56 minutes of the game and then somehow finds a touchdown drive inside a top hat in the last 4 minutes every week. Some people with guts (Mark Schlereth, Merrill Hoge) actually call him out on it, but most people praise his “will to win” and credit the Denver Tebows mid-season win streak on that. But there is nothing funny I find about having to listen to all that for another week. I’m sure he’ll be in the news enough anyway (and it’s good not to have to hear about Brett Favre anymore) and if they did get in and God forbid (pardon the expression) they accidentally beat the Ravens or Steelers what the media would say. Not funny. Result: Out
Tennessee: I wasted the 7th overall pick in my fantasy draft on Chris Johnson. Since then, I wasn’t even aware the Titans were still in the league. How the hell are they contending for a playoff spot? What the hell is going on? Result: Out