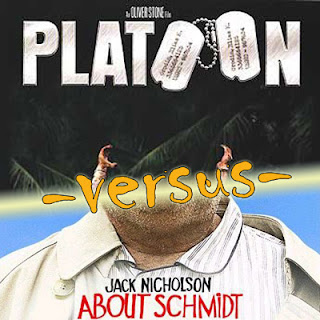 Bout #24: A character profile by one of the best character actors ever against the first war movie with guts and a war advisor to show em how it’s done. Ding!
About Schmidt: Not every movie needs a plot. This is a good character profile of a man at the precipice of his retirement. And by good, I mean completely average. If you’re looking to figure out if a movie is above or below average, figure out if it’s better or worse than this movie and you’ll have your answer. 5 bugs.
Platoon: This movie marked the first chapter of Dale Dye’s new career as war movie advisor. It had something most movies before it didn’t have. Like four Oscars. But it also cheapened it with superficial narration and overacting. 6 bugs.
Title: It’s always tough to measure the title of these iconic movies that are so much a part of our culture. I don’t know what the word “Platoon” meant before the movie came out. I guess that should mean something. (Point, Platoon 0-1)
Funnier: Not a lot funny about Platoon. Nicholson’s one-way conversation with his African foster child though the letter he sent were worth eliminating the phrase “by default” for this point. (Point, Schmidt 1-1)
Better Turn: As bad as war gets and as much as personalities clash, I like to assume that it isn’t going to be so bad that we turn on ourselves. So when Tom Berenger actually killed Willem Dafoe, it brought the movie to a new level of war. And it surprised the hell out of me. (Point, Platoon 1-2)
Better Ending: The entire movie of this man crumbling apart was framed by the letter he was sending to Ndugu. At his lowest point after a desperate attempt to get his daughter not to marry his fiancée, he finds himself completely alone in his apartment – no wife, no job and now no family. He gets a letter back from Ndugu saying that he didn’t understand English, but he thanked him and very much hoped for his happiness. It had a crayon picture of a man and a boy holding hands. It really made a slow movie worth watching. (Point, Schmidt 2-2)
Better Message: “War is hell” vs. “Retirement is hell.” (Point, Platoon 2-3)
Better Acting: As much as I loved him in Scrubs and some other things, John C McGinley has a way of acting where you can clearly realize he’s acting. (Point, Schmidt 3-3)
More Creative: I do love the frame job in About Schmidt, as I’ve mentioned. But I really like how Oliver Stone actually tried to create the same uncomfortable conditions for his actors as the soldiers endured to create the mood of the film. (Point, Platoon 3-4)
Poster: Once again, these titles and posters are iconic for a reason. That said, I do enjoy the cloud over Nicholson’s head.  (Point, Platoon 3-5)
Watch again: I don’t know that I’ll ever really watch any of these again if it’s up to me, but I have been on a war movie kick recently and I think I could see me trying to force someone else to watch Platoon and I doubt that would ever happen with About Schmidt. (Point, Platoon 3-6)
Overall: Well done, Platoon. You are apparently an above average movie. Winner: Platoon (6-3) 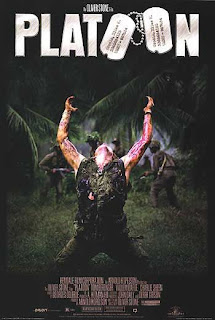