Review of Hugo
What started out as a whimsical kid’s movie turned into another PSA for Scorsese’s “Save the Film” foundation. I half expected him to come on screen at the end and try to solicit donations from us working class Americans who were just seriously questioning the financial implications of buying the large diet sprite. Screw you, Hollywood. You spend more on one dinner than I make in a month. Restore your own damn films. 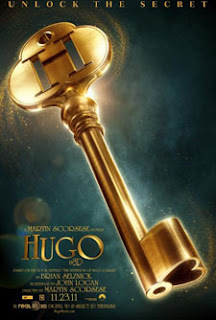 It must be an off year for this film to be a serious front-runner for the Best Picture award. Scorsese can’t seem to get out of his own way. He sets the scene for this to be a fun-loving kid’s movie and then bunks it up with this kinda true based on real life story of this artist upset because he had to give up his dream and get a real job. I doubt any child is going to give a crap about George Melies and how true to real life his film studio was. If it’s a kid’s movie, there are other ways to involve the adults than a history lesson on early 20thcentury film. If it’s a biopic on George Melies, there are other ways to frame it. But Scorsese’s need to indulge his passion for film restoration left the whimsical world of Hugo behind for this new storyline to develop. Don’t cross the streams, Martin. NEVER cross the streams.
The movie is billed as magical. It is not. The Neverending Story and The Adjustment Bureau are magical. This had potential. The automaton could have gone somewhere and the scene where the papers flew around the room gave me hope. That box could not have possibly held all that paper and the manner they flew around the unventilated room pointed to something magical. And then the wife says “there are some things you are too young to understand.” Ben Kingsly couldn’t even look at Hugo, his nemesis, in the eye. I got excited. This story is finally going somewhere after an hour-long first act which grew weary with Hugo’s twitchy-faced close-ups and the Keystone Cops chases through the train station. Here’s where it went. An artist had to give up his artist’s lifestyle to make a living. Yippie. This happens to 99.7% of all people in the world that aren’t in the Scorsese family. I don’t think the kids were too young to understand that. Neither is the audience.
In the interest of full disclosure, I did not see it in 3D. Maybe I would have been fooled by the magic of it all to realize how slow and meandering the story was. The emotionally charged, everybody wins ending did a good job of making you forget how long it took to get there, but it wasn’t worth the payoff. Too much screen time was wasted trying to unnecessarily turn Borat into a two-dimensional character and the Melies story made me feel more like I was back in Fine Arts 306 trying to keep my eyelids open through a lecture for Intro to Film. But it looks like Scorsese’s venture into 3D will earn him enough to restore all the films he wants so I don’t have to sit through another ad with him and Clint Eastwood on any more of my Netflix DVDs. 3 bugs (out of 10).

2 thoughts on “Review of Hugo”