I know I mentioned it before, but I saw that flick called Chocolat. Not to be confused with Like Water For Chocolate. 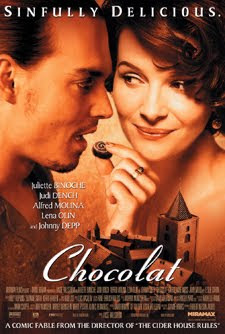 This one is just plain chocolat. No other words. Not even an E at the end. Because otherwise, it would just be called “Chocolate.” And that’s kind of a stupid title. Anyway, this is one of the movies like Traffic and Sitting Monkey Farting Squirrel that came out in New York for a day and a half before the end of the year just so it could make it into this year’s pool of Oscar nominees that will lose to Gladiator. I sat in a theater with one other couple during this ugly storm I told you about last time. I think I ruined an otherwise perfectly romantic evening for them. Sorry. So anyway, this was like Pleasantville, except instead of sex, it was about Chocolate, and instead of coming through a TV set from the future, it came from the North wind, which is more poetic. It’s a good movie about how this chocolate gypsy corrupts an entire town and wins the hearts of these chocolate pirates. It’s a good date flick, or so the couple in front of me mentioned. It’s a pretty good get the hell out of the hellish winter storm flick too. But those are the only circumstances under which I think I’d ever watch I Might Have Forgotten What I Did Last Summer ever again. So this rating might be tainted, but I’ll give it a solid 8 bugs out of ten. 2 bugs were taken away because I’m never sure how to pronounce it when I say it out loud.

Mike was describing the movie to me and telling me I should go see it sometime. When asked what it was about, he explained…

“Well, you know those commercials, ‘Behold the power of cheese?’ Well, they made a whole movie out of chocolate.”

I keep waiting for them to make a movie about the Nike Boing commercials.

Beholding the power of a nap,