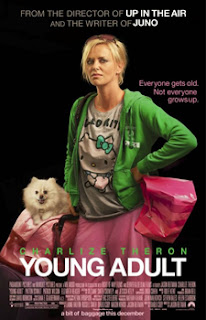 I liked this movie before it even came out. A delusional young adult trying to continue living her college years well into her thirties? Throw in the dilemma of when to divulge her actual age to her new friends and it’s basically Dustin circa 2005-2008.
A smokin hot author of Young Adult fiction (Theron) learns that her high school sweetheart just had a baby so she goes back home to save him from this lifestyle that he must obviously hate. Because she would. And why wouldn’t everybody think like her? Real people didn’t have kids. Only losers who gave up on the life that they couldn’t have because they weren’t smokin hot enough had kids. And now we’ve moved on to the current Dustin years.
Things don’t end the way she’d hoped. The movie drops a few clues in our lap that she might not be rowing with both oars if you know what I mean. But she also defends some random guy’s sexuality when given the opportunity. And when she completely breaks down, you think she’s coming to terms that maybe she has been stuck living in this Young Adult bubble. But then some bland girl from high school reminds her how smokin hot she is and how that makes her better than everyone else. And she’s back. Just when you thought she was having her first self-reflective breakthrough, she was pulled back into the TV.
I’m not sure if the movie had a moral in mind, but if the takeaway was supposed to help us understand that pretty people are immature well beyond their years because bland people occasionally look up to them, then kudos. Was she pulling her hair out because she was coddled? Or does she feel the need to be coddled because she’s not well. Good questions. Well presented, Diablo. Next time, do it without the jump cuts of her plugging in her laptop. 6.5 bugs (out of 10)