Inside the Head of a Performer – Part 2

(Ed note: I know I’ve been asking you to do a lot recently: read some other article first, come see my show, make love out of nothing at all, but I REAL 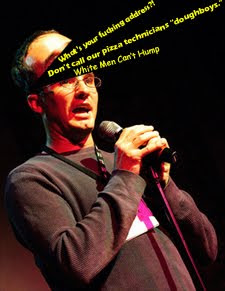 LY think it’s a good idea for you to read “Inside the Head of a Performer – Part 1” first. Stop me if I’m out of line here, but if I were you, I’d do that. And then if you can’t be with the one you love, love the one you’re with. But that’s just me.)

So my name was called and I was on my way up to the stage. There was a small amount of panic that I would forget my opening line and start telling the Sucker for Love story that I had spent all weekend doing with great success. But I was prepared. Amy was hosting the show and tried to adjust the mic stand to my height when I got up there. Dead air during this phase is not uncommon during story-telling and I don’t know exactly why. In stand-up, about 15% of the crowd would have gone to the bathroom if we took more than 5 seconds to adjust the mic stand. The goal is to start your set before the applause stops to avoid any dead air. It’s just accepted here. And so she started to try to adjust it. I helped and took even longer, knowing that I was just going to take it out of the stand once I was done adjusting it. Sure enough, the crowd laughed. I should have made a bigger joke of that than I did. Truth is that I needed it to be at the right height for later, so I didn’t want to make a joke out of it. But they didn’t know that. I guess I can’t think of everything.

So I already knew that I wasn’t as “in the moment” as I usually am before I had even said a word. Hopefully I would be able to get in the moment soon or just let my material do the work. My first joke was one blatantly stolen from Bill Cosby, but one I threaded throughout my story, so I kinda needed it. And it DID NOT get the laughter I had thought it would. It was simply “I didn’t go out at night a lot as a child… because that’s when the monsters come out.” I didn’t expect to hit that out of the park, but I was hoping for more than nothing, which is close to what I got. This was not off to a great start.

I had the inside knowledge that they forgot the bell that night. Which means that there was nothing to interrupt me if I went long. I had practiced and my story came in around 7:15 without applause breaks and crowd pandering. So I had the option to leave everything in had I needed to, though I’m not exactly out to abuse the time I was given. I decided to take out a joke in the beginning anyway because I wanted to get to Dominoes faster. I think that may have been a mistake. See, I really like to start out with a bang or two to get the crowd on my side. I believe it’s more important to have a good opener than a good closer for this reason. I think I may have relied too much on the 2 minutes I had already done to death to carry the rest of the 7 minutes.

The basic set-up is that I was working at my parent’s video store, Bridgeport Video, busting my ass all day in a small town that my family was well-known in. I spent most of the first 2.5 minutes painting a picture of Bridgeport. There were a few jokes sprinkled in there that all fell a lot flatter than I had planned. I was shocked up on stage. It’s a good thing I’m a consummate professional now because those duds would have seriously affected my ability to continue a few years ago. I also had the Dominoes scene to look forward to. Additionally, this genre isn’t like the quick pace of stand-up which needs to continue punch after punch. You can lie back for a little while and draw the audience in. When I watch the version of the Dominoes Pizza story that I told online at a Comedy Showcase at the Funny Bone in Kentucky, you can tell I rush through a lot of the set-up because of the impatient nature of that genre. I didn’t need to be as impatient here.

So I battled my way to my first true test. Shortly after I try to open the locked doors of Dominoes and get shunned by their workers, I start on a tirade “Do these Noids not know who the hell I am?” I then speak about my adolescent football prowess and a specific game in which we defeated the King of Prussia Indians with only 12 guys and poor Georgey Lattanze (good Italian name) fell on every play because he couldn’t afford cleats. This went on for literally an entire minute I believe. And I got angrier with every line. And I landed it perfectly! I hit every line and escalated my anger as necessary. And I hit my final line and quite honestly expected an applause break for the tirade I had just gone on. Instead, I got a couple claps. Fuck.

Then I got into the scene. This is the scene that would save me. It’s a great story to begin with, and there are some great hard-hitting lines in it too. (Ed note: this story actually happened to his dad, so most of the lines in it are complete bullshit, but the gist of it is accurate. Unless of course his dad was making it up) So I started. And it went decently. Not as well as I normally do with a Speakeasy crowd and not even as well as I do with that story at a stand-up crowd, which is much tougher to please. But I stayed with my character the entire time, growing with anger. “Well, what’s your fucking address?! Order it to yourself just outside” and “Sir, please don’t call out pizza technicians ‘doughboys.’ They work very hard…” hit the crowd the most. I maintained that anger until I hung up the phone on the manager “Well, your pizza sucks and you’re a dick.” I also thought there would be an applause break there too. Nothing. Just a couple polite laughs from friends I had in the crowd. What the hell? Was I really that wrong about this? Apparently.

Then came a part of the act that I had never tried to pull off before. I needed to put the mic back in the stand during my story. I know it sounds really trivial to those of you who haven’t ever done this before, but remembering what to say and trying to add flavor is tough enough. Try to do that while rubbing your tummy and things can get forgotten. And I was worried that when people saw me put the microphone back in the stand they’d think I was done. But I wasn’t. And I did a decent job of continuing my story while reaching back for the mic stand, which I placed behind me, rather than off to the side. I usually like to have the mic stand off to the side to hang onto with my left hand like a safety net. But it obstructs view from one side and confines you to one spot with the microphone in one hand. Also, the Speakeasy stand is tilted, which makes it difficult to handle without screwing it up.

So the microphone is placed back in the stand as I tell the audience that I did get a pizza that night. And I did it in time to gesture with my next line, which sent me back into another 30-45 second rant that would end my show. But during the rant, I took a Bridgeport Video hat out of my back pocket and put it on my head as I raved of the Ma & Pa stores and how they rule the blue collar town of Bridgeport and they should take the Corporate Chains and send them back to King of Communist Prussia. Again, this wasn’t met with the same amount of fervor I had anticipated, but it was at least enough to get people to clap on the way out. I left the stage, hat still on, and as I was getting back to my seat, Amy said something about the Ma & Pa stores that reinforced my point. I then chanted “USA! USA! USA!” which I secretly wanted to do on stage but never felt like the crowd was in it enough to pander to them. But at least I got to go back to my seat and relax for the rest of the show and catch up on my beer intake.

Once I got back to my seat, I was jokingly offered a card from a therapist. This was the greatest compliment I could receive as an actor. I must have really conveyed my anger well up there. And later Jen brought up the fact that I may have been too good of an actor up there. She thinks the crowd really thought I was pissed off, rather than jokingly pissed. So somehow I managed to pull off what I feel like was the greatest acting job of my stage career and it worked to my disadvantage. But though the crowd didn’t react the way I thought they would, I still feel pretty positive about the performance. I had really only agreed to it as a challenge, knowing that I was doing the Sucker for Love show so close to it. I was helping out Stephanie with her marketing while she was off establishing Western Union (See? That would be funny if you read “Inside the Head of a Writer.” Maybe).

I’m still upset that I didn’t get the crowd going as much as I should have and I wish I had thought about it a little longer, but I’m still pleased with my performance. I should also say that I know people who are tough on themselves and also people who think they’re much better than they are. I like to think I’m pretty practical in my assessments of myself. I guess I was due to come back down to earth after I kicked so much Sucker for Love ass the previous weekend.