Inside the Head of a Performer III – Part 1
Logic, Luck and Love

I’ve been recently writing about what goes on inside my head during specific stand-up and storytelling performances. I’ve only done this twice s 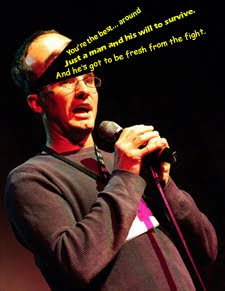 o far, though I’ve probably been on stage about 60-75 times in my short(ish) career(ish). Well, this most recent one was the most unique performance of those 75 shows. It was a delicious and intimidating performance smoothie, blending together equal parts stand-up, storytelling and theater – one of which I’d never tasted before.

It all started (for me) when Molly asked if I was interested in doing a show in the Fringe Festival with her, Jenn Moore and Kevin Boggs. I had just worked with Molly in Sucker for Love 2: Electric Boogaloo and graciously accepted doing whatever this thing was, having never heard of the Fringe Festival with no clue of the massiveness that it was. Molly and Jenn had gotten this concept to make a show based around the relationship experiences of both men and women, gay and straight and wanted four people, one of each gender and sexual orientation. After casting Kevin in a no-brainer decision, they needed one last piece for the puzzle – a straight guy. And there were none in the DC Theater scene. “Sure, I’ll be your straight guy.” And so I was cast.

We worked tirelessly on this project from February through opening night in mid-July. If this article were a cheesy 80s movie, this paragraph would be the cheesy montage scene with the necessary cheesy quasi-inspirational one-hit-wonder music playing in our earphones. Me sitting alone writing. Thinking. Idea! Writing again. Jenn, Molly and I on the roof laughing. Me crumpling up paper and throwing it dramatically across the room. The cat runs away from it. I pick her up and nuzzle her nose. More writing. All four of us around a table with salt and pepper shakers. Jenn moves them around a coaster as if they were people. Kevin then pretends they are having sex with each other and makes kissy noises. I roll my eyes. More writing. Rewriting. Editing. By the time June rolled around, I was thankful to go to work to get a break from rewriting all this crap. And then there starts the montage where we introduce Joe and Amy as directors and start pacing around the basement and get serious. This should have been the part of the movie where you got up to get an ice cream sandwich.

Cut to opening night. I’ve never been more prepared for anything in my life. No football game, no stand-up routine, no homecoming dance gig, nothing. Not even the SATs. Birth. Maybe my own birth and that’s about it. Still, I was more nervous than I had been for anything. In stand-up and storytelling, you’re hanging out with the audience before the show, flirting with the girls and drinking with your friends. Here, I was told we needed to be backstage. I never really had a backstage. I mean there was a green room at the Funny Bone, but we weren’t confined there like we were here. We kept peeking through the curtain to see people we knew. Molly and I both had a little audience participation, so we looked out to find our victims. All four of us took turns begin peppy with energy, nervous with anticipation, excited with motivational words and secluded in last-minute rehearsal. I can remember all three of them at different times telling me how great I was, along with each other. It was inspiring and comforting. Well done, fellow cast members. Amy came back every 5 minutes. “15 minutes.” “10 minutes.” “5 minutes.” This was what made me the most nervous. That and this was my first sober performance possibly ever.

See, I have a very well-documented three-beer rule before all my shows. But for this, I didn’t want to even tempt losing my place. I had other people counting on me. Besides, we were on stage for an entire hour. Though I wasn’t talking for the entire hour, I was on the stage. I developed a new set of rules which I am happy to have followed to the letter for all 5 shows. On the day of the show, I would have no alcohol, soda or cheese at all. No alcohol for reasons of not only inebriation, but also voice. No carbonation for reasons of burping. And no cheese because I have recently not been able to process it very well. Actually, I still process it, but into short bursts of methane gas from my ass, which is inconvenient when seated for a whole hour. These three rules definitely helped me survive 5 nights of being on stage for a whole hour without needing to pee, burp or fart.

“Places, everybody.” Shit. This was it. I had the voice of Joe echoing in my head about how important this first piece was since it was the thesis of the entire show. Our individual stories were written and the cards just happened to fall so that I opened the show. I went over in my head the one part in the first piece where I stumbled the most in warm-ups one last time. OK, at least 11 last times. And then Queen spoke. “Find me – somebody to loooove, find me…” And we were walking out to the front of the stage, the men from stage left and the ladies from stage right. We sat down during the music on this particular night, which wasn’t always the case. The crowd was packed. Every chair was full. The music stopped. This was my cue.