Another reluctant buddy action movie with a bad guy who might be good and a rookie who gets what he wishes for. Only this one has Ryan Reynolds. 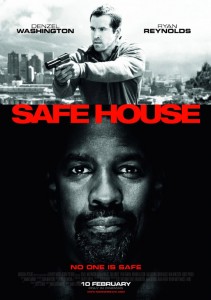 Ryan Reynolds is my wife’s movie crush. Which is fine because he’s mine too. He plays a safe house keeper for the CIA in South Africa. Through sheer dumb luck and shaky camera action, Denzel Washington falls into his house. Some real badass vigilantes tear up the entire crew that brought him in and only Ryan and Denzel escape. Oh, and it turns out somebody has been tipping off the vigilantes from the inside. Because that’s a necessary element to this movie also.

So it’s a tired plot we’ve seen before. But I still enjoy it, complete with the scene where we find out why Denzel went rogue and in a move nobody saw coming, he really has a heart and reasons for his actions. Actually, that scene sucked. And some of the things they did made no sense. Also, the end was confusing and the parts I understood were silly. I’m kinda talking myself out of having liked this movie so I’m just gonna stop typing now. But I still liked it. I think. 6 bugs (out of 10).