A movie about Facebook was nominated for Best Picture. And it came damn close to winning. 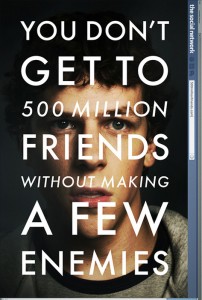 I wrote reviews on all the Best Picture nominees last February and to conserve time and because my opinion hasn’t changed since then, I’m just going to cut and paste that in here with an updated Bug Scale Rating at the end. Anybody mind that? Good. Also of note is that this movie came in 3rd of the 10 nominated this year (in my opinion), behind Inception and The Fighter.

I’d have to check again, but I think this might be the best dialogue in any movie I’ve ever seen. It was fast, it was fun and it was smart. I was pleasantly surprised by this and I don’t think they made Mark Zuckerberg out to be an ass at all. Just a really justifiably arrogant and brilliant guy. I can relate. I just don’t think a movie about Facebook can really win the Best Picture. If so, Facebook has officially taken over the world. Congrats. 9.5 bugs (out of 10).