Recently, our A/C went out and we had to live in the basement for about 4 nights with access to no other entertainment than my old VCR. It was the greatest 4 nights of my life. 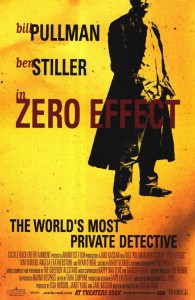 This is a cult classic if Mike Conover and I constitute a cult. And I have come to terms with the fact that we don’t. But it is still a modern day Film Noir that is paced and scored and acted accordingly. This is how a murder mystery is supposed to unfold in a movie. And the characters are superbly different. Bill Pullman and Kim Dickens have this intentionally awkward, non-sexual but still fascinating chemistry. I wish more movies had the balls to try what this movie tried.

Bill Pullman plays an eccentric Private Investigator who never meets his clients. Instead, he sends his associate (Ben Stiller) to meet them and run errands and convey information to the point where he flies him across the country only to talk to him on the phone in the airport. “You can never be too careful.” He is chronicling his method in a memoir as the movie goes on, which adds for some narrative exposition, aka Burn Notice. He explains his method of the two “obs,” objectivity and observation. These are the keys to the Zero Effect. Oh, his name is Darryl Zero. And there’s some fun stuff in there about a poem.

This is my hidden gem. If I am ever forced at gunpoint to name a movie that the perp probably hasn’t seen but would probably like, I’m going with this one. Odds are against that happening, but you can never be too prepared. You should all watch this movie. I have it on VHS if you need it. 10 bugs (out of 10).