Review of What to Expect When You’re Expecting 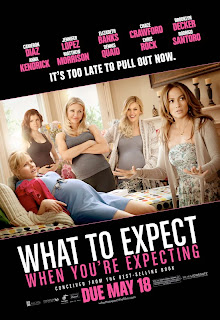 What to Expect When You’re Expecting is exactly what you’d expect. Unless of course, you expected it to be anything like the book. But I wouldn’t expect you would.
As an any-day-now to-be father, I thought what the rest of us fathers thought when we heard this movie was coming out. “Oh good! Now I don’t have to read the book.” This is incorrect. It is like seeing Oh Brother Where Art Thou and thinking “Oh good! Now I don’t have to read The Odyssey.” Or seeing Chronicle and thinking “Oh good! Now I don’t have to read the Bible.” There are pregnant women in this movie. After that, the director took some liberties.
I didn’t want to go see this movie because I knew exactly what was going to happen and I didn’t want Jenn to think it was OK to throw a book at my head because she was in labor. Sure enough, book thrown at head. Guy shakes it off. People in the crowd laugh. Jenn looks at me and smiles. Not OK.
The ensemble cast was also as good as expected. I still really like Anna Kendrick. I don’t think there’s anything special about Cameron Diaz or Jennifer Lopez. Elizabeth Banks is starting to vault herself over some other actresses to be among my favorites. And I had no idea Ben Cardone was this funny. Or what his name was or that he existed for that matter.
This is the latest movie trying to spin off of the success of the Love, Actually formula and a much better attempt than New Year’s Eve. At least I assume it is. I will never see that movie. The great thing about having 5 or 6 storylines in a movie is that you don’t really have to spend the time developing any of them. Each was amusing, some were attempts at touching, some were silly, but it was all as expected. Which is probably why that word is in the title twice. 5.5 bugs (out of 10)