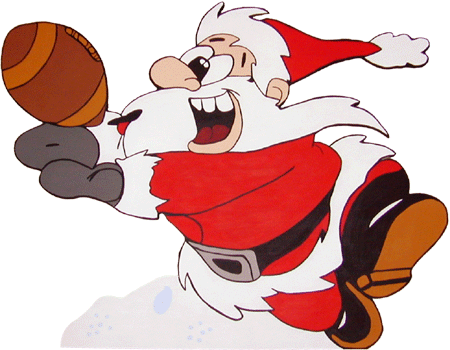 Twas the week before Christmas and all through the league,
The playoffs were looming, the fans were intrigued.
The good teams were prepping their final two games
While Sanchez and Rex just took turns taking blame.

Seven teams can breathe now; they’re into the show,
Including the Ravens with three L’s in a row.
Joining Bill and his hoodie; Jim Harbaugh and his crap
While Andy Reid settles for a long winter nap.

When out in the East, came a new kind of song,
So I sprang to the standings to see what was wrong.
Miami was woeful; Buffalo too
And the Jets were still sucking so that wasn’t new.

When what to my wondering eyes should appear,
But the Skins and the Cowboys competing this year!
The NFC East is completely reversed
With these two avid losers competing for first.

The playoff sleigh still had room for five more.
Even the Rams still had their foot in the door.
So Roger Goodell, with his hand on the reigns,
Called his reindeer who had some familiar names.

“Now, Brady! Now, Peyton! Now Flacco and Eli!
On Ryan! On Kapernick. Wait, who the hell’s that guy?
Not you, Brees. Let go!” and with a turn of his head,
He left Brees in the cold, peeing on his sled.

For the rest, click over to SoMuchSports.com, the sports site where this was originally published.