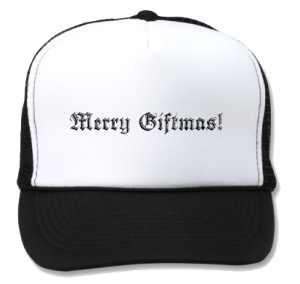 I fear that the constant bombardment of the word “Giftmas” being used daily over the last week on my facebook page has possibly offended some people, especially those that celebrate Christmas. Once may be cute and forgivable as “That’s just Dustin trying to be funny.” But when poked with a stick with it for twelve days in a row, even the most innocent of jokes can start to bruise, let alone one with obvious religious implications. So before (or at least not too terribly long after) I offend someone with my use of the word “Giftmas,” let me explain at least where I’m coming from when I use it.

I am using “Giftmas” not as an indictment on the Christian holiday, but rather because I prefer to celebrate a holiday that can unite people of different religions. I don’t think the holiday spirit needs to be confined to just Christianity. People of Muslim faith or no faith at all wear Santa hats and bake cookies for their friends and neighbors and even exchange gifts across religious barriers. I understand that there are religious ties to the holiday, but it seems to be more of a celebration of family and friends than of religion. And that’s OK. It’s a time of loving and sharing and exchanging of material things – some thoughtful and poignant, some useless and plastic. Not all family members share the same religious beliefs and I know that’s not cool in some families, but it is in most. Or at least it’s ignored and if the subject accidentally comes up, the conversation is steered towards the impeachment of Andy Reid.

Yes, I do believe it has become commercialized over the course of time, but I don’t think I’m alone there and that’s only on a macro level. Each family (and person) has their own ways of celebrating and who the hell am I to damn those practices I don’t have access to? I have been using the term as more of a religion-neutral “Happy Holidays,” but my need to be the most clever guy in the room prohibits me from doing anything so common. Besides, I thought I actually came up with the term when I thought of it back in 2007. Turns out I did not.

My deepest apologies to anyone I have offended. I was taught in Sunday School to never write out “Xmas” because I shouldn’t take the “Christ” out of “Christmas.” Similarly, I think it’s disingenuous to put it in. For those whose faith of which I know, I’ll happily wish you a Happy Hanukkah or Merry Christmas. For all others, and when speaking to the 1,721 mass of friends facebook thinks I have, I shall continue wishing everyone a more neutral Merry Giftmas. Because what else would you call a holiday that would bring together multiple religions? Exactly. You’re welcome.