I went to see 127 Hours by myself last week while Jenn was out of town fixing Egypt. I’ve gone to theaters on occasion by myself in the past. 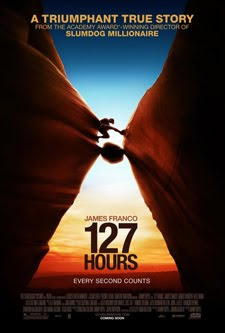 This time, I was completely by myself. It was somewhat liberating. I could laugh and not feel guilty, cry and not feel judged. I changed my seat three times to find the perfect one. It was pretty cool. I even left to get a snack and asked them to stop the film until I got back. They didn’t.

Just by coincidence, I was watching a film about a guy who happened to get stuck all alone in a rock climbing accident. Not that I was trying to empathize, but I also got my foot stuck between the two seats in front of me for about 5 seconds. Maybe not an exact parallel, but it was touch and go for a few seconds there. I also think I was sitting on my keys the whole time. So I could really identify with Aaron’s plight during the movie. I also drank my own urine toward the end. Which is difficult without a container.

As for the film, it is based on the true story of Aron Ralston, who some of you may remember from the Man Laws commercials with Burt Reynolds and Jerome Bettis back in 2003ish. He was the guy without a right arm. I had to ask Tony who he was, but that is pretty typical of any information I accrued from 1999-2004. He got his arm stuck for, as luck would have it, 127 Hours in a remote part of some canyon in Utah and had to eventually cut it off with a dull knife to escape. It certainly puts my intramural badminton championship in perspective. And the movie did a good job of not making him out to be a cheesy hero, just some athlete trapped by a momentary decision.

It was a great film to see, in that it is a historical moment in triumph over impossible conditions. But the entire thing, save for a gratuitous opening scene with a couple hot hiking chicks in the canyon, was one man alone in a very small place. Danny Boyle, who also made Slumdog Millionaire (pretty much the same movie), seemed too scared of boring his audience in the middle of the film, and for good reason. He added in some hallucinations and an amusing relationship with his video camera to try to get the audience to forget that nothing was really happening.

In trying to figure out how good a movie is, I try to figure out if I’d like to ever see it again. I don’t envy Boyle’s dilemma, but I doubt I’ll be watching this movie again. And if I do, I’ll likely have to be doing something else at the time or fast forward through the middle half. I’m honestly more likely to watch Harry Potter 7.1 again before I watch this, however good it was. And Franco was worth the nomination for his nose pimple alone, but I doubt this flick will walk away from the Oscars with anything more than a “thanks for making this moment into a film” pat on the back. 6 bugs