Review of “Harry Potter and the Deathly Hallows: Part 2”

OK, America. I have now watched the entire Harry Potter series. I hope you’re happy. And no, I’m not going to go see the Twilight series. That’s too far, America. Stop asking. 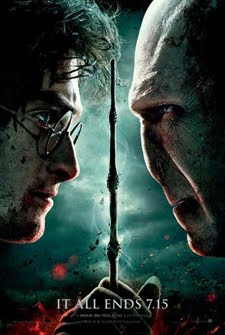 If I was 19 and grew up with Harry, maybe I’d have appreciated it on some level. The movies are glorified versions of prom and field day and other middle and high school crap. It serves well as escapist fantasy, especially to those middle schoolers who had intimate knowledge of what a wedgie felt like. But what about the rest of you people? You adults out there in your 30s, telling me I need to read the books to understand. No, I don’t. My issue with the series is the “make up the rules as you go along” magic which governs the Harry Potter franchise, making any outcome possible at any time. Oh. Elves can walk people through circles of protection? How flipping convenient? That must have been so hard to write.

So now that we understand each other, how was this movie? Cheesy and formulaic. Again. It reeked of a franchise that needed to make sure that it got in everything the world wanted to see in the last episode. Voldemort dies, check. Ron and Hermione get together, check. An underdog does something really important, check. Everybody important lives, check. It even supplied us with an epilogue that gave us closure and all the “keep your loved ones close to your heart” morals a middle school kid needs. They covered all their bases and once again, nothing you couldn’t have predicted or written yourselves.

The redeeming scene from the film came when Professor Snape, who was really the only three-dimensional character throughout the series, was flattened. It turns out he wasn’t conflicted, but everything he did was for Harry, thus making him good, so as not to confuse the middle school kids. But it was nice to know that he wasn’t such a bad guy after all, especially since Bruce Willis threw him out of a 30-story building back in the 80s.

But my favorite part of the film was when Harry was temporarily dead (but in the most original of twists, it all turned out to be a dream – nice!) and you could actually hear people in the seats sobbing. A lot. More than I have ever heard and I saw Titanic on opening night. Mind you, I am certainly more predisposed to crying in public than the average bear and if you’ve ever sat with me through the first 5 minutes of Finding Nemo, the second five minutes of Up or the last 5 minutes of most Monk episodes, you know. But I laughed. People really love this guy. And they also don’t know that the writers would never really kill him off, even though Dumbledore said it was ABSOLUTELY NECESSARY in order to kill Valdemort. And what evil villain kills the hero he’s been after for the last ten years but never actually checks to see if he’s dead himself? Besides Dr. Evil and The Penguin?

All things considered, this was very pretty to look at, but laborious to sit through. If I did a shot of sake every time the writer bailed herself out with double-talk and nonsense like in that scene that explained the Elder Wand, I’d be drunk by the second act. And I’d have probably enjoyed myself better. 4 bugs.