Inside the Head of a Performer VI: The Big Show – Part 4
The FINAL Preparations

Anyway, the entire week leading up to the show, I spent every moment in my car working on my routine. This is the only benefit in not having a functional car stereo that I’ve found. At least an hour and a half a day can be dedicated to practicing routines, writing new material or figuring out how many bottles of beer need to be taken down and passed around to get home. 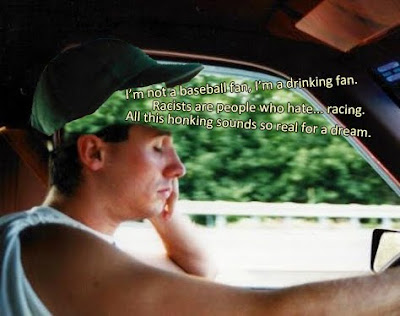 I finally looked at video of the last real feature spot I had, which was at Taglines in Eldersburg. There was some good stuff, but no surprises. I looked at the notes I made for Vijai’s birthday show last year, because that was 10 minutes of funny dick jokes. Again, no real surprises. So I asked around, specifically to my fiancée (at the time), Jenn. I was a little surprised at her answer. I basically asked her to rank 3 of my 2-minute bits in order of how she liked them. 1) Volleyball, 2) Day Camp and 3) Cornhole.

I had also added an introduction which had a joke about the Orioles and the Wire, because local jokes endear the performer to the crowd and current jokes give the illusion that you’re just funny and not doing memorized shtick on stage (note the word “illusion”). I also wanted to squeeze in a 3-minute bit about homophobia for MY fans. Some people would be there to see me and I wanted to make sure to include some intellectual social commentary to stay true to my mission statement as an artist. Believe it or not, I’m not just up there trying to make people laugh for 15 minutes. At least not anymore. That’s become too boring.

I timed all my bits to make the decision more mathematically sound. And I made my final set list. It read:

Altogether, this would last 20 minutes. Truth be told, I figured on taking a little more than my 15 minutes, but I had planned on cutting the 2:30 day camp bit. I just left it on my post-it note as a precaution, in case Aries pulled a mini-Dave Chappelle on me. A very mini one.

And so, still mentally unable to really dedicate any concentrated time on preparing, I started practicing in my car bit by bit. Literally. I would take one entire 45-minute drive and make sure I had my 4-minute dating bit ready. It wasn’t hard to get it all memorized since I had already done it all before, but there were a few subtle changes I needed to make. For example, everywhere I used to say “girlfriend,” I needed to say fiancée. Also, I wanted to make the order flow and make sense. A lot of comics will just jump from bit to bit. Some even acknowledge that they are up there telling jokes “Man, that shit is funny. You guys suck” or “Whoops, messed up that line” or planned stuff like “I wrote that joke in a Jeepers Creepers bathroom.” You wanna do that, it’s cool with me. I have made a conscious decision not to. It creates a different mood and in my experience, it’s usually one of unprofessionalism. If a joke doesn’t hit the way you wanted to, get over it. Make the next one funnier. Again, I want to maintain that illusion of just being funny, not a guy doing shtick.

By week’s end, I was sick of my material, but comfortable with it. I even took a few car rides off thinking about it because it was burning a hole in my brain. I put more effort into the new section on homophobia and the opening with the Orioles and Wire jokes to make me feel more comfortable, but it was pretty well memorized. The trick is to have it so well memorized that I wouldn’t need to think about it and instead I could think about the crowd or the next joke. For my head to be in front of my mouth so I could be in the moment. Not sure if I knew it all that well.