Quick Inside Slant:
by Dustin Fisher
Impressions of the 2011 NFL season as perceived by a Creative Writing grad student, part-time amateur stand-up comedian and collegiate intramural flag football legend (all same person).
Divisional Playoff Weekend:
This weekend is a rematch of the most poorly officiated game in NFL history. Luckily for the league and the entire officiating profession, Jeff Garcia’s 24-point comeback to lead the 49ers to a 39-38 victory over the Giants overshadows that hurricane of ineptitude. But the Giants should have won that game. And no, I’m not a crazy Giants fan claiming the refs were biased. I’m an officiating fan. 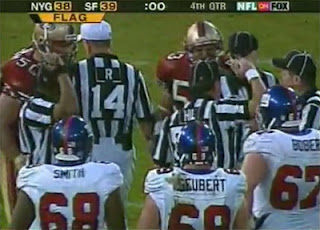 The last play of the game was a 41-yard field goal attempt with the Giants down by one point. It was 3rd down with 6 seconds on the clock and the Giants had one time out. Trey Junkin, who became the Bill Buckner of this game, botched the snap after having signed with the team four days before the game. In most jobs, he’d be lucky to have an e-mail address after four days. Why not make him the scapegoat for the entire season? Heck, he’s still under his probationary period. Probably wouldn’t even have to meet with HR.
But there were 6 seconds left. And it was 3rddown. And they still had a time out. Now I know it’s not your best-case scenario to rely on your punter to do some quick thinking, but here is a list of actions Matt Allen could have taken when the ball wasn’t snapped to him perfectly.
As long as a field goal is not actually attempted, you get to try it on the next down. That’s why people line up to kick them on 2ndand 3rd down. Again, relying on the punter to think of anything other than run for my life and throw the ball as far as I can is not your best-case scenario, but he should have been prepared for the bad snap from the insurance salesman. Oh, and the defense maybe could have stopped them from scoring 25 points in the last 17 minutes.
Back to the refs. After that fire drill of a play, a couple flags were thrown. It looked to all the world like it was going to be pass interference on the 49res and they were going to lose the game on a 25-yard field goal during an untimed down. But one of the flags was for an illegal man downfield on the Giants. They waived off the pass interference penalty because the man who was interfered with was downfield illegally and had he not been downfield illegally, he wouldn’t have been interfered with.
Que?
This is not a rule. This is stuff I make up when I don’t know the rules. The unfortunate thing is that he’s right. The logic follows that the reason he was interfered with is because he was downfield, where he shouldn’t have been in the first place. This is how you enforce the rules of Magic the Gathering, not American Football. If someone punches me in the face, it follows that I should be able to then kick them in the junk with impunity, because it wouldn’t have happened if the face-puncher hadn’t done his wrong thing in the first place. The penalties should have been offsetting and the down should have been replayed as an untimed down from the previous spot (the original line of scrimmage). This obviously doesn’t guarantee that the Giants would have won by any means, but I’d take those odds.
Oh, and here’s a cherry for your bullshit swirl sundae. The guy they claimed was downfield illegally – wasn’t. Rich Seubert, offensive guard, had checked in as an eligible receiver for the field goal attempt. The official’s saving grace is that there was a different illegal man downfield during the play, so that flag was merited. HOWEVER, that guy wasn’t interfered with. SooOOOoo, there goes their justification logic. The man that was interfered with was downfield legally and a different guy was downfield illegally. Replay the down, any way you slice it.
When intramural teams wonder why I don’t have a protest system at the University of Baltimore, this is the game I point to. If the highest paid officials in the world can bunk up something this bad and the NFL doesn’t do anything about it, your 5v5 coed indoor soccer game score is final.