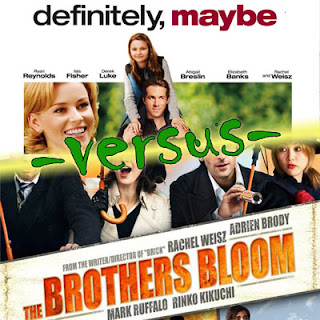 Wowsers. This one is too close to predict. Normally I can predict the outcome beforehand. Two evenly matched 7-bug movies take the ring. Place your bets.
Title: I do love the punctuation, but the more I read it, the more I read it, the more I think it’s maybe a little cheesy. Definitely. (Point, Brothers 1-0)
Funnier: Hey. Two comedies. I feel like this doesn’t happen too often. But Brothers Bloom was too strong, even for Ryan Reynolds. (Point, Brothers 2-0)
Better Turn: Brothers did make a bunch of turns, but Definitely didn’t have a turny enough turn. Advantage goes to the turnier turns. (Point, Brothers 3-0)
Better Ending: Brothers Bloom reminded me of the Maverick in the way that it kept ending over and over, which isn’t necessarily automatic disqualification. But it was r
efreshing to see a realistic relationship between a divorced father, divorced mother and child. (Point, Definitely 3-1)
Better Message: Again, I’ll cite the realistic nature of the divorced relationship for this category’s sake. (Point Definitely, 3-2)
Better Acting: Rachel Weisz cancels herself out. But in a movie where you were supposed to guess which of three women would end up with the main character, the casting directors did a great job of finding three women who weren’t villainesses. (Point, Definitely 3-3)
More Creative: Definitely was a modern day Princess Bride with Abigail Breslin playing the role of Fred Savage. But it’s also about a guy telling his daughter about all the women he’s been with, which is weird. And Brothers Bloom pulls off a period piece with style. (Point, Brothers 4-3)
Poster: Not really a strength in either case, but I like how in Definitely’s poster, all three women are looking at Ryan Reynolds, who is looking up at his shoulders to the star of the movie, Abigail Breslin, who is the only person looking at the camera. (Point, Definitely 4-4)
Watch again: I’d watch either of these movies again, but I’ll go with the movie that finally told a romantic comedy from the guy’s point of view. You don’t see that often enough. Plus, I own Brothers Bloom on DVD, so I’m a lot less likely to watch it. (Point, Definitely 4-5)
Overall: First Brothers Grimm, then Brothers Bloom. This movie is not kind to brothers. Good thing Will Ferrell and John C. Reilly aren’t in this bracket. Winner: Definitely, Maybe (5-4) 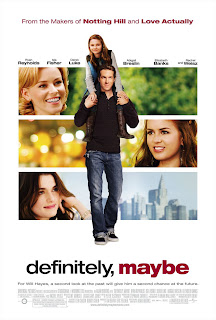