End Around
Sure, I’ll dance around this mine field for a while.
Joe Paterno passed away yesterday at 85, two months after being fired amidst allegations of his involvement in a child sexual assault scandal. I must first say that I in no way condone his mishandling of the sexual assault situation, be it for reasons of ignorance or apathy. What I will miss about Joe is an idea.
Before we all knew about the Sandusky case, Joe Pa represented everything decent about college sports. In a time where college athletes care more about endorsement deals, fantasy stats and signing bonuses, Penn State football was a vision of integrity and teamwork, continually posting the best graduation rates of all big market teams. They still don’t put names on the back of their jerseys for the sake of team unity, which is a tough sell to the increasingly more individualistic world sports is becoming.
The world of sports has been sliding down a slippery slope of self-interest since we started to market the individuals more than the teams. The average player would rather get paid than be a champion now – or at least that statement is truer and truer every year. The media, the fans and the athletes all feed into each other like an evil flux capacitor and keep this ball rolling down the aforementioned slope. As the media are giving the fans what they want and the fans are being told what they want based on what sells tickets and jerseys, it’s really up to the athletes to help change the culture. And it’s an unlikely scenario. Kobe was a good candidate until his own sexual assault scandal. As was LeBron until his hour-long nationally televised ego trip. And on the college level, USC and Ohio State are getting sanctioned for abuses of the system, and that seems like just the tip of the iceberg. At least we had Penn State to look to as a role model.
So the Sandusky scandal is just another reminder that we can never be sure. There was no better role model in college sports or sports in general than was Penn State football. So when I speak of Joe Pa and when I wear my Penn State jacket around this week, it’s in honor of the integrity and teamwork that Penn State preached to the nation for some 60 years – the idea that maybe somewhere, there is a savoir for my future child’s concept of team sports.
In poetic, storybook fashion, Joe Paterno died yesterday of lung cancer two months after being fired from the job he’d had for 60 years. But he really died back in November. His legacy will forever have that unforgiveable asterisk next to it. I am not so much mourning Joe Pa as a person, for it’s clear now that we didn’t know him like we thought. But I’m mourning the concept that a hero will rise among us to stop the landslide of egotism that is being fostered in professional sports, down to college, and all the way down to youth sports. I’m not saying it can’t happen. But if there’s dirt on Joe Paterno, that role model is going to be hard to find. 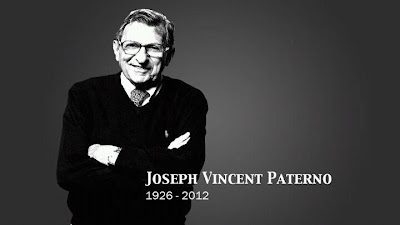