Double Feature Duel (Rd3):
Rise of the Planet of the Apes vs. Definitely, Maybe 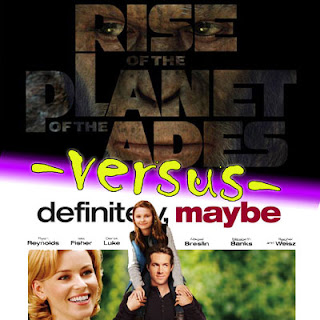 The newest of the Ape movies is the last of the sequels I spent most of this tournament watching. Can it represent the franchise in the Final Four or will the overachieving romantic comedy pull off the upset?
Title: If I have to go onto a second hand in charades, you’re disqualified. (Point, Definitely 0-1)
Funnier: Two words. First one is romantic. Second one… (Point, Definitely 0-2)
Better Turn: I can’t describe to you all enough about how awesome the scene in the little ape jail was. It was badass, emotional and just awesome. (Point, Rise 1-2)
Better Ending: I did enjoy the divorced couple and their daughter show us what it’s really like. But the beginning of the end of the human race was noticeable, yet not overplayed. (Point, Rise 2-2)
Better Message: Don’t tell your middle school daughter about all your sexual escapades from your early 20s. (Point, Rise 3-2)
Better Acting: Tough one. I love Ryan Reynolds. And Abigail Breslin. And Rachel Weisz. But I think Andy Serkis should be talked about in the Oscar race as an ape. But I opened for Adam Ferrara and I’ll let that be the tie-breaker. (Point, Definitely 3-3)
More Creative: Definitely framed a romantic comedy in a new and creative way, but the story and the references to the original series were the most creative movie of 2011, if I get a vote. (Point, Rise 4-3)
Poster: The poster represents the badassery to a tee. (Point, Rise 5-3)
Watch again: As I mentioned in the last entry, I currently have the Netflix DVD in my possession. Kinda hard to beat that in this category. (Point, Rise 6-3)
Overall: Well, good for you, romantic comedy. You made it to the second weekend. Now go home and let the big boys play. Winner: Rise of the Planet of the Apes (6-3) 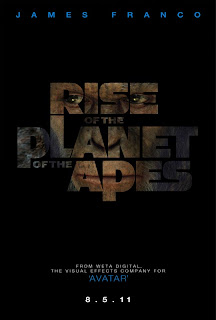