Double Feature Duel (Rd3):
The Man Who Wasn’t There vs. Bucket List 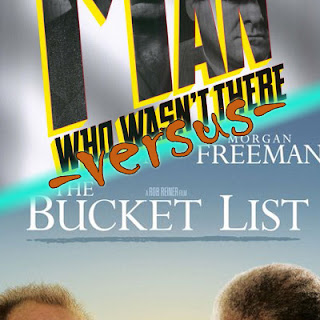 After beating a 7-bug and a 6.5-bug movie, the 4-bug Coen Brothers film is up against another 6.5-bugger. Will the dream die here or live on to the Elite 8?

Title: The Man Who Wasn’t There. Where was he? Who was there? Why wasn’t he there and should he have been? So many questions is just the title. (Point, Man 1-0)
Funnier: (Point, Bucket 1-1)
Better Turn: This is where Man usually makes its move. (Point, Man 2-1)
Better Ending: Truth be told, I had to struggle to stay awake to the end of Man. Bucket List had a fun message at the end and a fun twist at the very end. (Point, Bucket 2-2)
Better Message: In addition to the obvious messages about living life to its fullest, there is a message in there about friendship and classism. Much more than the jumbled mess Man presented us with. (Point, Bucket 2-3)
Better Acting: I will love Tony Shaloub unitl I die, but he’s up against 4 Oscars, and Brian Haley isn’t going to help enough. (Point, Bucket 2-4)
More Creative: Not much to Bucket’s plot, though it had its moments of creative spark. But it wasn’t the period piece mood-setting triumph that Man was. (Point, Man 3-4)
Poster: I guess I should like it more for its simplicity, but I just don’t. (Point, Man 4-4)
Watch again: And finally, it met its match. I guess it’s just got a good set of characteristics for this game, though not enough to get to the Elite 8. (Point, Bucket 4-5)
Overall: Okey dokey. Glad that’s finally over. Hell, even Tim Tebow won a playoff game. Winner: Bucket List (5-4) 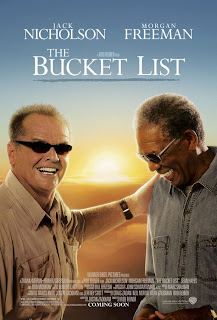