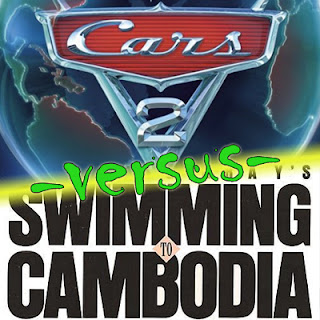 Bout #25: Pixar’s latest vs. a documentary of a one-man show. Hmm. Don’t think we’ve done that yet.
Cars 2: Even if cars could talk, I don’t think they’d come up with a plot this ludicrous. The gimmicks aren’t as funny and the shtick is old now. Sadly, we have gotten to a point where we see flying animated cars talking to each other and it doesn’t wow us anymore. If this was Pixar’s first movie ever, I’m sure my jaw would be on the floor and my eyes bugging out of my head, possibly with one of those “a-ooooga” sounds from old Warner Brothers cartoons. But unfortunately, it’s not. And Owen Wilson played a bit part in this movie for some reason, yielding way to Larry the Cable Guy. And a little Larry the Cable Guy goes a long way. Sorry, Pixar. It took ten feature length movies, but it turns out you are human. 4 bugs (out of 10)
Swimming to Cambodia: This is a not a documentary. It’s a documentary squared. It’s a movie documenting a one-man show by Spalding Gray in which he takes you on a cerebral roller coaster, touching on Asian politics, how to buy and treat a Taiwanese whore and how to talk to people on trains. It’s funny, intriguing and he speaks in the style of a boxer who refuses to let you up off the mat, pounding you with sentences so well constructed, I’m reasonably certain he has every word of the entire 87 minute monologue in its proper place and nails it perfectly each time. Or at least this time. So how interesting can a movie shot solely of a man sitting in a chair behind a very plain desk be? Well, about as interesting as the performance. Which was about as good as I’ve ever seen. But not enough to make you realize it’s just a guy sitting at a desk. 7 bugs.
Title: The intrigue starts with the title. Who is swimming to Cambodia? When are we going to find out about this? Where the hell is Cambodia? (Point, Swimming 0-1)
Funnier: I don’t blame you if you completely disagree. It’s not everybody’s sense of humor. But if you like dry wit, you’ll approve. (Point, Swimming 0-2)
Better Turn: Maybe if I watched it another 4 or 7 times, I’d find some assemblance of a plot, which will in turn help me find the turn. But Cars 2 had a turn. Literally and figuratively. (Point, Cars 1-2)
Better Ending: See “Better Turn.” (Point, Cars 2-2)
Better Message: The thing about documentaries that are shot of just one man telling a dialogue about random things is that they tend to have a lot of thought-provoking messages. Unlike movies about animated Cars made strictly for profit. (Point, Swimming 2-3)
Better Acting: This was as good a single performance as there has ever been. Probably. (Point, Swimming 2-4)
More Creative: More daring? Absolutely. More creative? Hard to justify that. (Point, Cars 3-4)
Poster: Swimming To Cambodia is as simple as the movie, which is a good formalistic technique. But if you look closely at the map of the world, the continents are in the shape of cars. Kinda neat. (Point, Cars 4-4)
Watch again: I’m actually looking very much forward to ingesting more of Swimming to Cambodia. If Cars 2 came on cable, I’d probably find a rerun of SVU instead. (Point, Swimming 4-5)
Overall: Close one! No matter how high rated a single person 87-minute performance is, it’s still going to just lose a lot of categories. But not as much as a meandering, overthought sequel to a mediocre movie. Winner: Swimming To Cambodia (5-4) 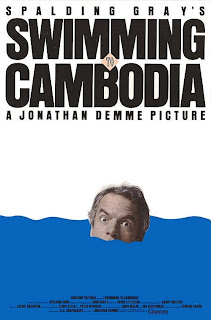