Double Feature Duel:
Super 8 vs. Pirates of the Caribbean: On Stanger Tides 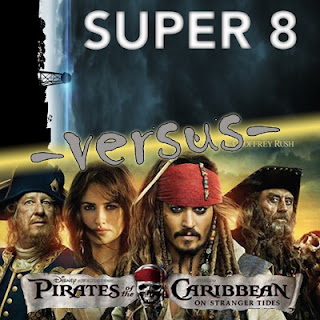 Bout #26: J.J Abrams’ follow-up to Lost vs. Johnny Depp’s latest paycheck.
Super 8: Substitute the plane for a train and this movie is basically the pilot of Lost. J.J. Abrams is very good at drawing you in with really exciting and well-edited action sequences, alluding to a supernatural threat to the human race, painting himself into a corner and over-revealing said creature to disappointment the audience in the end. But he also paints some great characters. I know my dating history should preclude me from saying this, but I really like Elle Fanning. Purely in a young actress kind of way, of course. And the witty banter between the young film wannabes was brilliant, and I don’t often say that about dialogue. All the i’s were dotted and the t’s were crossed. It’s just a shame he can’t figure out how to tackle the pesky plot issue. 7 bugs (out of 10)
Pirates of the Caribbean: On Stranger Tides:Well, it’s better than the third one. I think. They always manage to sneak in some weird, interesting magic-type stuff, but this is starting to look like Johnny Depp’s day job. I really like Geoffrey Rush as Barbosa, but Penelope Cruz and whoever that new goodie goodie was were no match for Keira Knightley and Orlando Bloom. The franchise has been content with the same recipe that has made for its Blockbuster success, critics be damned. And as long as they keep putting them out, I get to keep wearing my Capt. Jack Sparrow hat, so I’m content. 3.5 bugs (out of 10)
Title: Brilliantly simple, intriguing, foreshadowing and you don’t have to go to a second hand in charades. (Point, Super 1-0)
Funnier: There was some very well written and acted dialogue in Super 8 by the four main adolescent characters that is worthy of note. (Point, Super 2-0)
Better Turn: This movie made its money on the turn. Maybe the train crash rivaled the ridiculousness of Final Destination 2, but it didn’t feel like it at the time. (Point, Super 3-0)
Better Ending: Truth time. I was unable to pay much attention to Pirates. But I know the ending of Super 8 sucked, so congratulations. I guess. (Point, Pirates 3-1)
Better Message: Super 8 is another one of those stereotypical flicks teaching people not to stereotype using aliens. I forget how Pirates ended, but I know it had something to do with people looking for the Fountain of Youth. But it did have a Christian/mermaid love story in it. (Point, Pirates 3-2)
Better Acting: Geoffrey Rush is always outstanding. You can’t picture Johnny Depp without picturing Capt. Jack Sparrow. But those four kids are terrific in the conversation scenes. Penelope Cruz didn’t ruin the movie for me. But I added like 3 movies to my Netflix queue with Elle Fanning because of Super 8. (Point, Super 4-2)
More Creative: It’s tough not to pick Pirates in this category with the three-team race to get to the Fountain of Youth. But having the camera pick up the footage was a fun move I haven’t seen since Blowout. However, they really bunked it up in the end with the alien reveal. Epic fail, as they say. (Point, Pirates 4-3)
Poster: For those that don’t know, the Super 8 camera fell sideways, which is why the poster is sideways. Brilliant, right? (Point, Super 5-3)
Watch again: I enjoyed Super 8 so much, I watched it on two consecutive nights. I liked Pirates so much, I don’t even remember watching it once. (Point, Super 6-3)
Overall: A film with half as many bugs scored half as many points. Funny how that works out. Winner: Super 8 (6-3) 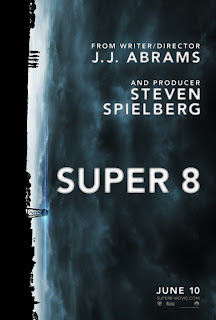