Double Feature Duel:
Limitless vs. The Tree of Life 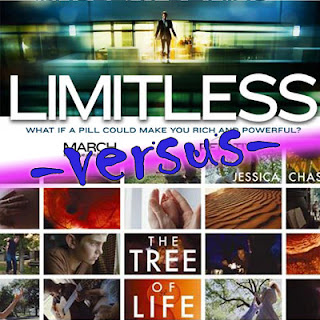 Bout #28: A movie I really wanted to see that turned out to be just OK vs. a movie I thought would be interesting that turned out to be the most boring however many hours of my life in this millennium.
Limitless: I don’t know why I expected more from the sexiest man alive. Not all of them have the balls that Brad Pitt does. Toward the end of the movie, when we find out that this smart pill has fatal side effects, the movie decides to skirt the problem by having Bradley Cooper somehow conquer the illness, maintain the intellectual effect of the drug without taking it anymore… and… well, it just pretends that whole whore murder in the hotel room didn’t happen. Because the one limitation the movie had was making the sexiest man alive out to be an imperfect guy at the end of the movie. It’s unfortunately enough to make you forget about the good parts, which were really just high-budget more serious versions of Psych episodes – and instead focus on the plot holes, like why would this guy give Cooper the pill in the first place and why Cooper wasn’t smart enough to pay this Russian gangster back in time. And why the heck did he settle on helping with this big financial merger? Curing cancer or HIV too boring for you, smartypants? So in the end, the movie didn’t have any balls. But like the teacups, you get a few good spins for all that uncoordinated rocking back and forth. 5 bugs (out of 10)
The Tree of Life: In film school, I was made to feel stupid when I didn’t understand things – experimental structures, installation art, Jackson Pollack. Since then, I have come to realize that I may have been duped, lied to by the creators of this art and the circle jerk community they all live in, to believe my own mind to be immature and brainwashed, simply incapable of “getting it.” Maybe I overcorrected myself and I really don’t get things that should be gotten by the greater populace and I am indeed in the lower 16% on the intellect-meter. Occam’s Razor would suggest this to be the case. But after years of research, I’ve determined that I am indeed not the problem. I get it just fine. And this film was boring, flaky and tried all too desperately to be the transcendental film that was in Terrence Mallick’s head. Props to those who bought into it, but just because something is different doesn’t make it good. And just because you don’t understand it, doesn’t make it art. Sometimes when you don’t know what’s going on in a movie, it’s because it wasn’t explained well enough – not because of you. Who died in the beginning? What’s with all the different narrators whispering? Why are there dinosaurs in this movie with more screen time than Sean Penn? What the hell is the point of the dragon head nebula other than to make us go “Wow! It’s that thing from the Morgan Freeman show?” Malick is a magician, showing you an empty hand while he splatters paint on a four-dimensional canvas with the other. And somehow, he got 84% of the Tomatometer critics to applaud the empty hand. Not me. I’d sooner watch a reel of projects from my Film I class back before we learned why jump cuts were bad. I would have thrown the DVD in the trash, but then I doubt Netflix would have sent me another. 0 bugs (out of 10 – though I guess it doesn’t matter how many it’s out of)
Title: The Tree of Life seems to reach for a cliché already, while Limitless feels like a cop out. I’ll at least give Tree the benefit of doubt. But that won’t last. (Point, Tree 0-1)
Funnier: Limitless didn’t really try to make you laugh. Tree of Life wanted to make sure you didn’t. (Point, Limitless 1-1)
Better Turn: Finding out that the drug is illegal and the dealer is dead vs. 25 minutes of the earth’s creation capped by poor CGI dinosaurs feeling remorse. Ugh. (Point, Limitless 2-1)
Better Ending: I still don’t know what happened in The Tree of Life. But it was still better than the way Limitless ruined itself, Adjustment Bureau-style. All of a sudden, and with no transition, Bradley Cooper can manage the drug to the point where he doesn’t even need to take it, whereas everyone else died from withdrawal. No balls. (Point, Tree 2-2)
Better Message: There is something to that “the way of grace vs. the way of nature” stuff in The Tree of Life, however horribly it’s framed. (Point, Tree 2-3)
Better Acting: Bradley Cooper is good, but nothing really special. Brad Pitt is a good, stern father. But Jessica Chastain was great and should have been in the film much more than she was. (Point, Tree 2-4)
More Creative: Holy crap! A 0-bug movie is getting dangerously close to a victory. And though it might seem that a movie with this much randomness and jump cuts is creative, but in the same way Jackson Pollack is – and I’ve already mentioned how little I care for that type of work. (Point, Limitless 3-4)
Poster: Sadly, I like The Tree of Life poster better. And I’m a little ashamed that a 0-bug movie, openly called the biggest waste of my time in 11 years, has now made it to the second round. Wowsers. (Point, Tree 3-5)
Watch again: No way I will ever watch The Tree of Life again. Not even if it comes out on Blu-Ray. (Point, Limitless 4-5)
Overall: Well, Limitless shot itself in the foot really, with the spray cheese ending and the boring poster. Man. Winner: The Tree of Life (5-4) 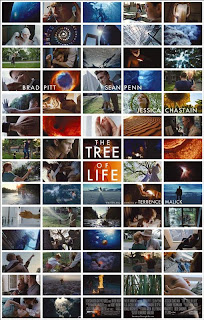