Double Feature Duel:
Midnight in Paris vs. You Again 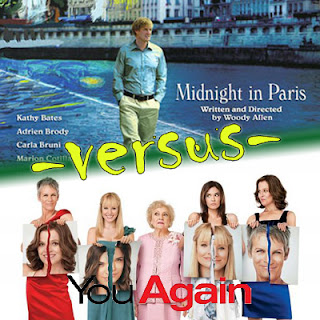 Bout #29: An Oscar-nominated Woody Allen film vs. a get the actors together and then we’ll figure out a plot… thing.

Midnight in Paris: Owen Wilson and Rachel McAdams are back together again in the long-awaited sequel to Wedding Crashers. This was a really fun movie. They talked too much – especially in the beginning, which is typical of Woody Allen movies, but once Owen Wilson found himself transported back in time, the real story began and the conversations seemed a lot less contrived. Which is weird, because he was talked to dead people from another time period. The film definitely sported a few annoying writer’s contrivances and inconsistencies, including Gertrude Stein’s pronunciation of the word “lititure.” And they happened to run into another couple visiting Paris at the same time? I don’t even run into people I know at the Wheaton Mall and I have over 1500 facebook friends. I realize that complaining about this traveling coincidence when people are transported back in time to parties with T.S. Eliot and Hemingway seems picky, but without getting too into too much detail, I’m right. (Ed note: that was actually no detail at all) In addition to the fun at the heart of it, the movie had a working purpose. While Owen Wilson loved his past, the people of that time wished to go back further, and so this would continue until the universe was a singularity (this was cut from the movie for time). But the message goes deeper, and not where you’d expect, when Woody turns the tables on romanticizing the past. 8.5 bugs (out of 10)
You Again: This was your standard “get the right actors on board and then figure it out” movie. The script could have been written on the back of a napkin that said “Kristen Bell, Jamie Lee Curtis, Sigourney Weaver, Betty White.” It was fun in parts, however unoriginal and predictable. It tried to be the hilarious all-girl comedy that Bridesmaids was with big names instead of big talent. And they checked all the boxes. They had the “we’re wearing the same dress” scene and of course the “we’re both somehow throwing each other into the pool together” scene, which was the only use of slow motion in the entire movie by the way. And the director couldn’t even bother to ask the officials from the high school basketball game to tuck their shirts in. Really? That’s the level of attention to detail you have for your product? At least pretend to have some pride in this film. Or was it just a paycheck? 3.5 bugs (out of 10)
Title: Midnight in Paris is descriptive and romantic all at the same time, but You Again can be said with so many different intonations, it’s worth the point for versatility. (Point, You Again 0-1)
Funnier: Both were actually funny, but Woody’s was more introspectively funny. Still, Midnight lost a crapton of points when they had the “same dress” gag and the hot chicks throwing slime on each other. (Point, Midnight 1-1)
Better Turn: I almost immediately assumed getting transported back in time in a 1920s car was going to win this, but then I remembered the scene where we found out that Kristen Bell’s nemesis actually remembered her was quite awesome. Yeah, sure. Why not? (Point, You Again 1-2)
Better Ending: Saving ink. (Point, Midnight 2-2)
Better Message: Midnight teaches you to appreciate the time period you are in. We all romanticize the past. You Again teaches you that if you’re a bitch, don’t get caught. And if you catch someone being a bitch, don’t tell people about it. The movie tried a little too hard to make both of them wrong. (Point, Midnight 3-2)
Better Acting: They didn’t necessarily ask Jamie Lee Curtis, Sigourney Weaver, Kristen Bell and Betty White to act, in their defense. They were just asked to show up. (Point, Midnight 4-2)
More Creative: Ink. (Point, Midnight 5-2)
Poster: The night sky in Paris turns into A Starry Night by Van Gogh. Very nicely done. (Point, Midnight in Paris 6-2)
Watch again: You Again wasn’t horrible, but I’d like a second run at Midnight someday. (Point, Midnight 7-2)
Overall: Down early, a 6-point run to end it was just for show toward the end. Winner: Midnight in Paris (7-2) 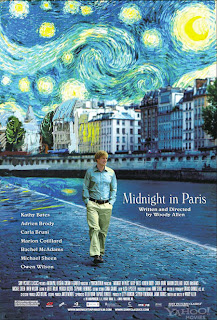