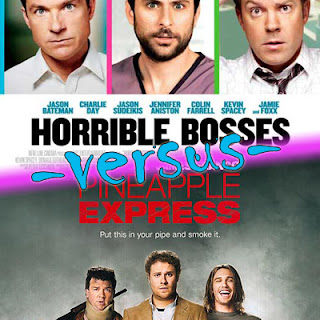 Bout #30: I will take Charlie Day over Seth Rogan in any category ever. Acting, stand up, team scrabble. Whatever.
Horrible Bosses: The latest in a long line of inept wannabe criminal films where the movie makes you sympathize with the would-be murderers, either through their likability or ineptitude. Jason Bateman, Charlie Day and the new guy from Saturday Night Live are the three main characters who land in a bar trying to hire Jamie Foxx to help them. Of course, he only agrees to be their murder consultant, as he doesn’t want to head back to the clink for the hard time he did for pirating DVDs. Through all this, the stars of the film are the namesakes in an ultra-narcissistic Kevin Spacey, a coked-out Colin Farrell and a sex-crazed, batshit crazy Jennifer Aniston. Props to Farrell for stepping outside his normal heartthrob role, but seeing Aniston talk about her pussy was as jaw-dropping as hearing Kathleen Turner drop “cocksucker” and “motherfucker” in Serial Mom. The concept was the same one from Throw Momma from the Train because it was good enough for DeVito and Crystal. The ending is weak, which often happens when you try to get all your main characters out of a dark comedy scot-free. The Hangover got lucky. But enough humor made it through all the plot contrivances to make it worth the watch. 6 bugs (out of 10)
Pineapple Express: I have rarely been more disappointed when looking at the Tomatometer rating than I was when I found out that critics gave Pineapple Express a 68%. I figured the audience would like it. People are stupid. But critics who critique films? This film sucked. By a country mile. The dialogue was atrocious, the plot was stupid and it couldn’t figure out whether or not it wanted to glamorize pot or berate it. The movie was riddled with pointless and distracting slow motion, freeze frames and wipes. The big turn of the film was an argument scene between the two potheads to allegedly mount tension, only with dialogue written by and for potheads. Maybe if I smoked pot, I’d think this was funny. Maybe 68% of critics were high. I’m guessing they thought the rope rubbing scene was comic gold. I only finished watching this atrocity out of respect for Jenn, who probably didn’t want to finish it either. In the climactic fight scene at the end, Seth Rogan actually said the words “There might be more bad guys through there.” I’m mostly upset at whoever it was that decided Seth Rogan was funny. This was obviously written while high, shot while high and needs to be viewed while high. James Franco is the only thing salvaging this movie from a 0 bug rating. 0.5 bug (out of 10)
Title: Boy, they just couldn’t think of anything else, could they? (Point, Pineapple 0-1)
Funnier: I just wasn’t high enough, I guess. (Point, Bosses 1-1)
Better Turn: The scene where Seth Rogan tries to teach his pot dealer a life lesson is one of the worst written scenes in the history of cinema. (Point, Bosses 2-1)
Better Ending: Except maybe for this one. (Point, Bosses 3-1)
Better Message: Pineapple Express couldn’t figure out what the hell it wanted to do. Is it pro-pot? Anti-pot? Does it have any idea what the hell it’s doing at the end? (Point, Bosses 4-1)
Better Acting: I feel bad that James Franco was even in that movie. (Point, Bosses 5-1)
More Creative: Well, there wasn’t much originality in stealing the basic idea of Throw Mamma from the Train, but at least it acknowledged it. And the way they used Jennifer Aniston and Collin Ferrell was awesome. (Point, Bosses 6-1)
Poster: Franco’s hilarious expression is cancelled out by Rogan’s grandstanding nonsense. And Farrell’s hair is almost awesome enough to make up for the lack of anything really interesting. I guess I’ll go with the cloud of smoke in the background. It feels less like an intro to Print Shop project. (Pineapple 6-2)
Watch again: If I live right, I shouldn’t ever have to watch that awful movie again, even in parts. (Point, Bosses 7-2)
Overall: After Tree of Life, I was a little nervous. Thank you, Horrible Bosses. Winner: Horrible Bosses (7-2) 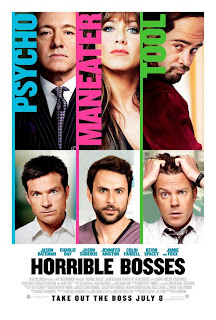