Well, I saw a bunch of movies since I did my last movie review. I’m going to review two of them today. One gets 11 bugs, and one gets one bug. One had a boy who could see ghosts, and one had a guy named “The Shoveler.” One is currently waiting for the two week shock value period to be over so it can officially be named my new favorite film, and one has no ascernable cinematic value at all. One is like a Twilight Zone on an $80 million budget, and the other has a guy that farts on people for a theoretical laugh. One had me leaving the theater in tears, and the other had me leaving the theater in tears. 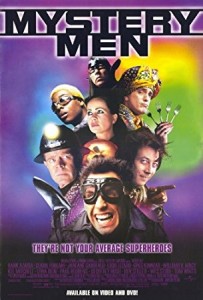 Mystery Men was awful. I was 85% sure it would be, but I was so happy to be out of the freaking hurricane, I didn’t care what movie I was watching. And trust me, being cold and wet had no effect on how bad I thought this film was. You could be dry, warm, eating an Entemens Double Chocolate Cake and getting a Kathy Ireland massage and still see that this movie sucked. I suppose it was supposed to be a farce of an action movie, but it didn’t make it as a comedy. I don’t think I ever actually laughed. I thought about it twice, and I recognized their attempts to force humor, but I don’t think I ever experienced the actual involuntary reflex itself. The idea was great, but the plot was silly, the acting wasn’t even all that good (and I love Jeanine G.), and the little one-liners that are designed to make action movies funnier just weren’t funny at all. I think it might have even been a better film if the boom mic was in every other shot. And the guy from Fargo just randomly had a black family. Now, it’s OK that he did, but I really feel like maybe one line of explanation was necessary. I didn’t get it. There was one decent scene when the 3 main characters were discussing Captain Amazing or whatever he was, and drawing parodied parallels to Superman. That was sorta funny. And the fact that Captain Amazing had sponsors was a good poke at corporate America. 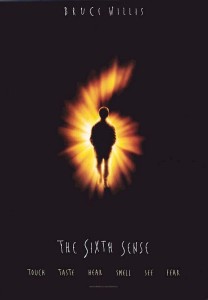 Together, those gimmicks mustered up a lonely lousy bug in my book. A Superbug!!!, but just one bug nonetheless. Now Sixth Sense blew me away. I expected it to be good the way everybody I knew was talking about it, but I didn’t think it would be that good. And I’m going to have a tough time talking about it without giving any important information away to the people who still haven’t seen it. So you’re just going to have to trust me. If you haven’t yet seen it, don’t associate with anyone who has. Don’t watch a trailer of the film. Don’t fall asleep, do any homework, or see, smell, taste, hear, or touch anything until you see this movie. Don’t even pass go. It’s the best way, trust me. Then you can go about the rest of your life as you normally would have. If you feel the urge to bring me a chocolate milkshake in the meantime, I suppose I’ll let you do that too. And I always thought having a sixth sense would be cool. Not if it’s this one. Of course, I always thought my sixth sense would be like the sense of flight or seeing through clothes. At any rate, I’m giving this film that I refuse to say anything about 11 bugs. I wasn’t sure if I was going to ever go above 10 bugs, but Sixth Sense is better than A Bug’s Life. In a very different way, I might add. I had no other choice. Go see it. Now!

Well, I don’t actually have a quote about either film to use, but I can almost have a segue. There are few films I would actually give 10 bugs or more to, and one of them is the topic of today’s quote. I have mp3s. Upwards around 900 of them. Of everything possible. I have one mp3 2 seconds long of a quote from Back to the Future. Somewhere between 2Pac and 38 Special, Geoff heard it come out of my speakers…

I guess he rounds up to the nearest 121.