Review of 50/50
Somebody made a comedy about cancer. Very dangerous. Especially when you consider that Seth Rogan is in it. Spoiler alert: He plays a pothead. It’s like Roberto Benigni bouncing lines off of Tommy Chong in Life is Beautiful. My intense dislike for Seth aside, it was tastefully done. Mostly. 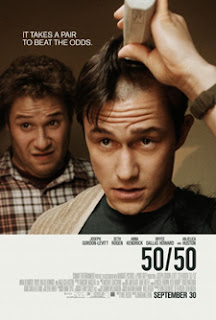 Seth did not disappoint. In under five minutes, he was already talking about fuck and dick and shove it down her throat. I powered through his scene-stealing stand-up routine in hopes he would disappear into the background once the plot took form. Thankfully, that happened. Mostly. He eventually let the star of the movie have a couple words in edgewise and proved to be best when playing the wing man role that he should have been from the start. The bar scene where he was trying to figure out how long into a conversation to bring up cancer in order to get him and Joseph Gordon-Levitt laid was great. The scene where JGL and Bryce Dallas Howard were breaking up and he decided to take over the camera sucked me so far out of the moment, I thought I was watching Pineapple Express again.
The story goes how you think it would. A young dude gets cancer, his selfish girlfriend leaves him, his selfish pothead friend turns out to be a good dude, his mom is scared, the doctor is unsympathetic and everything is touch and go until he escapes the surgery cancer-free.  Don’t worry. I didn’t ruin anything.  Clichés abound in this film, from the doctor glancing over the word “cancer” when he first mentions it in mid-sentence, a father with Alzheimers, a wet-behind-the-ears social worker who replaces the girlfriend as a love interest (played beautifully by Anna Kendrick) and a last chance make-a-wish fulfilled. Mostly.
Even considering all the clichés, the predictable plot and the Seth Rogan factor, the movie had its moments, both funny and emotional. The selfish pothead friend actually had a book on cancer in his bathroom and there was a little misdirection with a phone call to Anna in the final scene before the surgery. The movie pulled off what they set out to do and Seth Rogan didn’t ruin the film. Mostly. 6 bugs (out of 10)