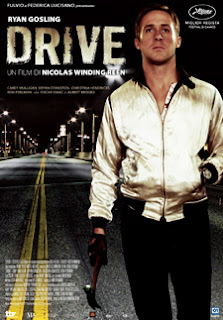 Before I will address whether or not I consider this an Oscar snub, can somebody please tell me why this was shot like it was an 80s movie? The music and the opening credits all pointed to this being a sequel to Silk Stalkings. Years from now, does Albert Brooks just want the world to look back at this movie and think he was just ahead of his time? But they still used cell phones and Al referenced his life back in the 80s. So I guess this was a meta-movie, kinda like The Player and Get Shorty? Or just a gimmick without reason.
So was Albert Brooks snubbed for an Oscar nom this year? Let’s start the movie. The opening scene was phenomenal. Ryan Gosling is a Hollywood stunt driver who moonlights as a freelance getaway driver who pulled a job before those confounding credits even came on. He has his 5-minute rule and once his criminal clients pulled the job and got in the car, he and the movie took off. The scene was brilliantly shot without any dialogue. All the audio came from the police scanner and the broadcast of a Clippers game. He dodged, hid, outran and escaped into the parking garage just before the Clippers game let out. Awesome.
Then the movie started. Nothing like that ever happened again. His life as a freelance getaway guy was all but completely dismissed in favor of a tired plot with a reluctant hero who gets accidentally mixed up in some mob business. There’s a cute love story – but without the sex – so as to let you know that he’s just a nice guy. He just wants to be her friend and spend time with her son and help her ex-con husband get rid of some skeletons. There was a lot of staring in this part of the movie. Which Ryan Gosling and the chick from An Education (Casey Mulligan) happened to be very good at. This is contrasted with a high dose of violence: heads getting stomped in, chicks getting shot in the face, forks going in people eyes. It was a little more than it needed, but after those hot pink credits, who knows what’s going on in Albert Brooks’ head.
In the end, Gosling gets the girl and her kid some money and some safety and kills all the bad guys. But he gets stabbed in the process and sits in a car bleeding seriously form the stomach. Maybe he’s dead. Maybe he’s not. The camera pans to his eyes. Will they blink? If they don’t then this is just like Inception. If they do, then they didn’t have the guts to leave it ambiguous. They can’t win. Gosling blinks. Then he drives off, leaving the audience to wonder if this was the first time he’d done this or not. Maybe in the sequel, we can explore this getaway character a little more rather than get him caught up in a cookie cutter mob movie. I’m not much of a fan of the nominees this year, but this was no snub. 5.5 bugs (out of 10) 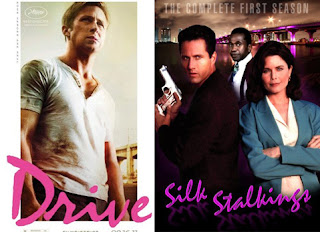