Review of Blue Valentine
I thoroughly enjoyed this movie. And not just because Michelle Williams spent about a third of the time with her legs up in the air. 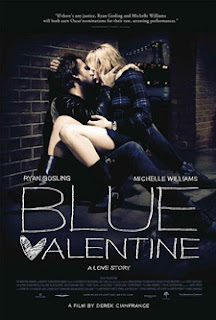 This is a portrait of a blue collar family and until I just now typed the word, I didn’t draw the comparison to the movie title. Coincidence vs. Irony argument aside, I enjoy movies that don’t lie to the audience. I also enjoy a nice heaping mound of deceit in the form of a flying Delorean, but I enjoy movies trying to depict what it’s actually like to be in a relationship, unlike everything Meg Ryan has ever been in.
I’ve gotten myself lost again.
Blue Valentine phases back and forth between the romantic beginnings of a relationship and the dramatic end of that relationship. The conversations, especially the petty fights from the latter part of the relationship chronology, would have hit the cutting room floor in most Hollywood studios. But Derek Cianfrance grabs that emotion by the nads and exposes it to the world. Who hasn’t gotten irrationally angry about your partner running into an ex? And who hasn’t gotten irrationally defensive about telling your partner about that run-in? And who hasn’t been upset about something – but when confronted with the whole relationship unraveling – turns that anger into desperate cries of “We can make it work” only to hear the brutal reality that the two of you can’t stop treating each other bad? If it wasn’t so painful, I would have watched that scene 20 times.
Michelle Williams was brilliant and worth the Oscar nomination and when the hell is Ryan Gosling going to get the respect he’s earned? Yeah, he’s sexy. But Brad Pitt was sexy once. You can be both sexy and a good actor.
This movie isn’t for everybody. It flirts with infidelity and pornography, it’s slow in parts and it’s depressing in others. But it’s the honest depiction of a relationship I’ve been crying to be made since John Kevin Boggs shouted out “Meg Ryan is a fucking liar!” 9.5 bugs (out of 10)