Alright, I’m gonna do this backwards for a reason. Tony, Drew and I were walking back from volleyball practice one night and we started talking about The Matrix. This was back before everybody had seen it already. I asked if it was supposed to be good or not. Drew said that a lot of people were saying that because of this movie, Star Wars was going to have a tough time being considered the best movie of the year. To this, Tony replied…

“Really? But it’s got Keanu Reeves in it.”

That it does, and Tony, Drew, and I went to see it that very night. It was awesome!! Now, like any Keanu Reeves movie, all 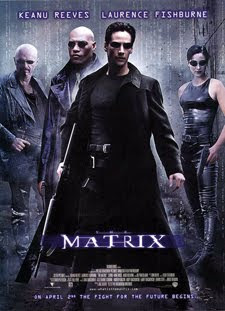 critiques of it must start with him. Just how bad was he in this movie? He was actually tolerable. And here’s why: He wasn’t actually required to act. He just had to pose. And he posed good. Like a dog looking at an algebra problem. Now onto the effects: They’re like nothing you’ve seen before. Unless you’ve seen a Gap ad. But this time, they’re not used to show a bunch of sickeningly cute people dancing. They’re used to blow things up. Pretty cool. And this movie had no scantily clothed damsel in distress. Depending on what kind of a mood I’m in, that’s generally a plus for me. It’s a movie that’s willing to stand alone on it’s science fiction worth, which is generally not a risk one should be willing to take. But it got lucky. Sci-Fi fans, rest assured that you will love this film. It’s trippy. It asks some really cool questions. It looks very pretty. And if you don’t have time to watch TV like me, you can probably avoid seeing the entire thing in the previews. However, if you average sitting through 3 sitcoms a week, you’ve probably already seen the entire thing. And during the middle, when they’re trying to explain everything to you, it actually sorta drags. If you can pretend you’re actually really interested in it, you can tolerate the middle. That’s how I got through most of my art history lectures. I mean, I guess it’s important and everything to the plot, but it’s sorta boring. That’s maybe when I coulda used that scantily dressed damsel chick. Denise Richards would have been a good choice. All things considered, I’m giving it 8 1/2 bugs. I’m just glad it wasn’t about algebra. It would have lost some serious buggage.