Review of The Hangover 2
The best thing about this movie is that is wasn’t any worse than I thought it would be. 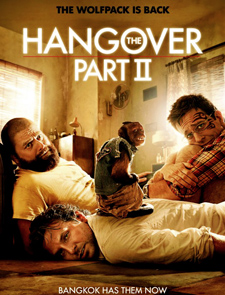 The Hangover 2 blurs the lines between sequel and remake. Same characters, same story, new location. To recap: Somebody’s getting married. Three characters wake up with no recollection of what happened. Someone is missing and they have to piece together what happened. Some weird shit and bad puns happen along the way. Zack Gigglefecus falls over stuff, Ed Helms screams and makes faces, Brad Cooper has blue eyes. Fade out.
The script asks Zack to do a little too much and exploits his inability to act. The surprise of the tattoo was over about three months before the movie hit the theaters, so we didn’t really need the reveal they gave it. The movie was filmed in Shanghai but was written in Writers Contrivance Village. Be prepared for a lot of sperm humor. Though it does play Downeaster Alexa almost in its entirety on the flight overseas and Ed Helms plays a parody of Allentown. That alone earned it back a bug and a half. 4 bugs (out of 10)