You remember the critique I did of Waking Ned Devine? To recap, I’ll just tell you that it was a fairly boring 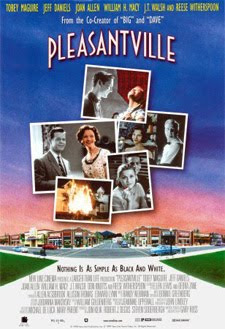 movie with a really cool ending confusing the lesser-intelligented people that it was a good movie. At least on their way out of the theater. Well, this movie is the exact opposite. Quite possibly in only that way, but you get the point. It was an excellent film on so many levels tainted by the “random grasp at an artsy ending” ending that it had. At the end. This guy in Pleasantville that had gone from good to sorta bad and back to good at the very end of the film was getting back together with his wife, and all of a sudden he turns into Jeff Daniels. I don’t know how I would have ended the film, but I don’t think that would have been it.

Now for the other 2 hours. This movie was incredible. It was great on so many levels, I probably didn’t even get to fully enjoy it on all of them. And I fancy myself a pretty intelligent fella. Handsome too. It starts out by Don Knotts sending these two 90s kids to go back into this black and white 50s sitcom where everything is perfect and… well, pleasant. We don’t know why he did this, what his plan was, and certainly how he did it. Whatever. It gets the movie started. Now these kids slowly corrupt this place little by little. People in this ideal town have never had sex before. Even the parents. Well, these kids come in and mix it up a little bit. They start boinking these people of Pleasantville, and this corruption makes them turn into color. Talk about a scarlet letter! Just like that chick with the red from Schindler’s List. But in a completely opposite way I guess. But it’s not just the sex that makes them change colors. It’s the acceptance of change. Or something. I don’t want to ruin it completely for you, because I require of all of you that you go see it. Eventually, the traditional folk riot the “coloreds” and put up signs that say “no coloreds allowed.” Lots of literary and historically social references in this film. To Kill A Mockingbird, the aforementioned Scarlet Letter, Quantum Leap, Do the Right Thing, and this really cool Twilight Zone episode where monsters come down from another planet but don’t really do anything except let the people tear themselves apart, to name a few. And the effects are incredible too. People walk around a world half in color and half in black and white. I can’t believe I hadn’t heard of this movie yet. It is very underrated on so many levels. Possibly because of the ending, but that might just be my own lack of tolerance for cheese in such matters. I’m giving this movie an unprecedented 9 1/2 bugs. I wanted to give it 10, but the ending is a real stumbling block I just can’t get over. Maybe I’ll sit down one day and think about it until I can convince myself it makes sense. I’m stupid enough to fall for that. But until then, I take 1/2 a bug away from it’s perfect record.

Quote. Quote… Now I have to think of something funny somebody said. I got it!! Here’s something good, but it’s a real visual joke. And it makes fun of Russ, which is doubly awesome. Russ and a bunch of other coordinated people were playing a softball game today. There was a relatively close play at home in which Russ was directly involved, being the runner in question. Anyway, there were about 8 people all around yelling at him to slide. He does. But not really. He doesn’t really stick one leg out and fold the other one underneath him like you’re traditionally supposed to. Instead, he sort of timidly leaps both feet outward and in the air sticking in front of him and catches himself with his hands and sort of shimmies along until he finally gets to home plate. This looked like how most kids go on a slip and slide, but he did it on hard dirt. That’s the best way I can describe this so-called-slide. But Derrick was able to describe it very loudly in a much better way…

“What the hell was that Russ? You looked like a bear scratching his ass on the ground.”

You should see his crossover. He looks like a monkey scratching his nuts.

Setting bear traps on the basepath,