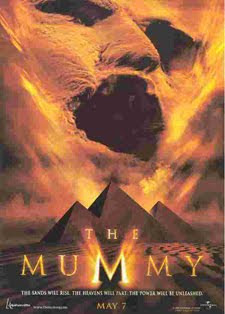 1 pint of Army Of Darkness
3 Cups of Indiana Jones and the Raiders Of the Lost Ark (or whatever one you thought was the second best)
A pinch of The Ten Commandments
5 heaping tablespoons of 6.0 molar digital effects
George Of the Jungle
Mix until thick
Bake at 375 degrees until golden brown

I liked The Mummy. But I was expecting Stargate. Some sci-fi desert thriller. I got Army Of Darkness. Don’t get me wrong, I love Army Of Darkness as much as the next cult, but I what I thought was water turned out to be Sprite. It was a little hard to swallow at first, but once I got the taste of it, I enjoyed it a lot. It wasn’t quite gin or hydrochloric acid, but… well, you get the point. Be prepared for the movie to be somewhat on the silly side. I should have gotten a hint from the whole “Brenden Frazier” thing, but I chose to overlook that. But if you want to see some more good effects and you’ve already seen the Matrix 5 times this week, I recommend The Mummy. The effects were arguable just as good as those in The Matrix. They were just on two different planes. Like Sprite and Pepsi. But The Mummy took a little too long to get going. Just when I thought to myself, “this movie’s got to get going soon,” it started to. And I’m much more patient than a lot of people. I’m also much less patient than a lot of people. There was a lot of concentration early on the conflict between the Americans and the Europeans, which nobody really cared about once the Mummy came to life. Decide for yourself. I still recommend that you guys all go see it while it’s at the movie theater. The effects just aren’t the same on a 18″ TV with mono speakers. The Mummy gets 8 bugs. That’s 1/2 a bug less than The Matrix, 1/2 a bug more than Patch Adams, and the same amount of bugs as Wild Things. I’d say that’s about right.

We were coming back from the movie Friday night, when a deer ran out in front of the car in front of us right near the entrance to UMBC where the speed limit goes from 55 to 25 on the same road. Anyway, the car in front of us slowed down a lot, and before we noticed the deer that this guy thankfully knew was there, we had no idea why this jerk had stopped in the middle of the road. Anyway, the deer ran by and I chose to yell out the window at it “Get off the road, Asshole!!” Drew had a different social commentary…

“I’ve heard of speed traps before, but this is ridiculous.”

Damn government got the deer workin for em now too!