Review of Married to the Mob
I cannot put myself back in 1988 to remember what movies were like then. But if this movie came out today, I don’t think Jonathan Demme would have gotten to make Silence of the Lambs. 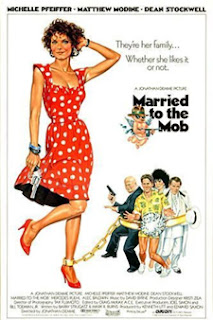 Maybe it was customary of the times to make a comedy without funny parts. But I prefer my comedies to be funny. I’m just assuming it was billed as a comedy from my memory. But if it wasn’t, there should have been some drama, action or romance in there instead. Or a lesson on how to make falafel. I’ll dismiss certain obvious sins of the times, like the film quality, lack of effects, the overuse of close-ups, the ridiculous use of slo-mo and the God-awful wipe transitions that fell out of a bad sitcom. But the movie was just so damn boring. If you could wade through the first hour of caddy girls with accents yelling at each other, the payoff was an awkward forbidden romance that was old and tired even for 1988.
There was also a boom mic as obviously in a shot as I’ve ever seen, to the point that I thought it couldn’t possibly be a microphone. Yet, it was. The climax was as anti-climactic as I’ve ever seen. I couldn’t decide what was worse – the writing, the shooting or the editing. One thing I have decided is that it doesn’t really matter. 3 bugs (out of 10)