Well, I watched a movie last week that could have potentially changed my life if I already thought I was a racist 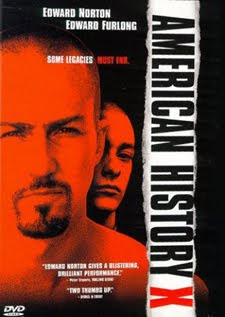 Nazi asshole. That movie, for those of you who haven’t seen or heard of it yet, is American History X. And it is GOOD. But I’ll be the first to warn you. It’s not a date movie. If you show this to a girl right before you plan on making the moves on her, abort. Save the moves for after Shakespeare In Love or Titanic. Or even The Waterboy. Don’t be led on by the first scene where there are graphic shots of Ed Norton banging Fairuza Balk (from the Waterboy, coincidentally enough). It’s all downhill from there. Hey. Sorry, I got a bit off track there. My point is that this movie is not a happy movie. It’s funny in two minute doses when it needs to be, and I think that even only happened once. Ed Norton plays a bad-ass Nazi racist respected by all his Nazi clan, especially after he goes to jail for 3 years for brutally killing two black guys who had just broken into his truck. The movie takes place after he gets out of jail, but about 1/2 to 2/3 of it were very well placed black and white flashbacks. I don’t want to give away any parts of the movie, because I think everybody on this list should go see this film. It illustrates a very powerful message in an extraordinarily poignant and touching way, though some say it needlessly digs up old social wounds. And it has nothing to do with Spike Lee.

This film had the misfortune of being rented and viewed on the same weekend as A Bug’s Life. However, it had the fact that it had absolutely nothing in common with the kiddie flick going for it. It’s like comparing apples and Bob Saget. All in all, I am giving this film an unprecedented 10 bugs. I could find absolutely nothing wrong with the film, with the possible exception that it made me want to cry in a room with 4 other heterosexual guys in it, which in case you all didn’t know, is a real no-no. I think everybody out there should see the film at some point in their lives. Just not on a first date.

This quote came as a response to a response that I had to a quote that I wrote a long time ago that was said an even longer time ago. (?!?) Same statement, less vague: This January, I wrote a quote that happened over two years ago now in which Suzanne was making a play off of the internet joke circulating around called “Girlfriend 5.1” by asking if anybody was interested in a Girlfriend 2 and 3 quarters. To this, laughter ensued. I finally got around to quoting her on Jan 30th and as I occasionally like to do, I put in my own commentary under the quote saying “I’ve been looking for a more current version of Girlfriend. Masturbation 5.1 gets old when you have to play it every night.” Well, Proznik had a smarter ass reply back then, and I hope I’ve at least recreated it enough for you guys to appreciate it on some level…

That’s why I’m into multiplayer games.

I’ve really been in need of some newer software ever since my floppy drive was reinstalled.

Not quite a Pentium,