Well, I was a dork and saw Star Wars: the Phantom Menace the day it came out. But at least I didn’t wait in line for tickets. I let my slightly dorkier 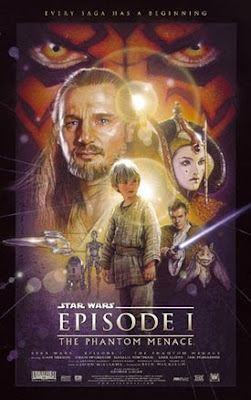 roommate take care of that. And I figure that it’s been almost a week, so for the 5 of you out there who haven’t seen it yet, you might not want to continue reading this until you’ve already watched the movie at least once. Stryker saw it 4 times before he came back into work Monday. He redefines the word “dork.” But enough about him, you’re probably asking yourselves “what did Dustin, oh wise elastic guru of the film generation, think of the much awaited and overpublicized prequel of the already highest grossing trilogy in world history to our knowledge?”

I’ll elaborate… Is there anybody else out there that felt that Chris Tucker’s character in the Fifth Element ruined the movie for them? Well, Jar Jar Binks is less annoying. But not by much. He has this grating, squeaky voice with an unrecognizable accent and speaks in broken English worse than Yoda’s. And he refuses to keep his dirty-ass tongue anywhere near the inside of his mouth. They even made a $7 lollipop (the kind where they put $6.75 of plastic around a regular lollipop) called the “Jar Jar Binks Monster Mouth Candy Tongue,” in which you are forced to French kiss this hideous sidekick creature-thing. (Actually, it’s probably closer to $0.50 of plastic and $6.25 of Lucas copyrights). The thought makes me never want another lollipop as long as I live. Who knows what his tongue tastes like? Probably artificial cherry, but I’m not taking the chance.

Anyway, this guy and random other Lucasville creations were too distracting too overlook. He’s clumsy and stupid. At least C3PO and Chewbacca were helpful and humble. They didn’t hog the spotlight from Mark Hamill, who can’t really act anyway. But this Jar Jar guy is in about 85% of the film. Thank God Natalie Portman was in the whole thing. Then there’s the kid. I didn’t think he could act at all. But it’s kinda tough to tell with dialogue as poor as what it was. I’ve never really cared for the dialogue in the Star Wars films though, so this film was about on par for the series. But the effects were awesome, as you would figure. In fact, I think a lot of the effects went unappreciated by me because I was already expecting them to be good. When you go see it a second time, pay attention to the sound effects during the pod race (and go see it in a theater with surround sound). And that’s another thing. Everybody I know tells me I need to go see the movie a second time because it’s so much better the second time. Well, I’m having problems accepting the fact that I’m not intelligent enough to get it all the first viewing.

But I guess anything is possible.

I’m not going to bother critiquing the story because I’m sure I’d piss off some Star Wars droid out there. I didn’t follow it from conception. I haven’t done any of the research required to understand every little thing that is going on. I don’t own any Star Wars paraphernalia at all. I got a Jar Jar pog from Pizza Hut and set it on fire. I feel bad for Star Wars fans. Because even if they didn’t like it, they have to pretend they did to save face with respect to the rest of us, who ignored all the hype and went to see it on our own leisure. I didn’t dress up like Darth Vader or that Undertaker-looking dude. Imagine if you dressed up to go see the newest film in your favorite series and you didn’t like it. Would you have the guts to tell anybody that? Or would you look straight at the lens of the channel 8 news camera and go “It was awesome!”? I’d do the same thing if “A Bug’s Life II, Flik Goes to Hollywood” sucked. Keep in mind, I’m not saying Star Wars sucked, I just think it pales in comparison to the hype it’s been getting. Kinda like Jurassic Park II, The Lost World. Except that sucked. Rating this film is difficult in many ways. For one, I don’t know the entire background of The Trade Federation, Palpatine, and Naboo like a real Lucasfilms junkie. Secondly, I fell asleep several times during crucial moments in the movie. Thirdly, I’m biased by all the hype. Even someone as self-proclaimed numb to the media as myself couldn’t help but be influenced at least a little bit by all the damn tokens and placemats and the first 8 pages of the new Toys R Us catalogue. So I’m rating this film with respect to 3 different axis. First, as a part of the series, I’ll give it 8 bugs. I guess it follows the story pretty good. Maybe. Second, as a kid’s movie, I’ll give it 9 bugs. The kid hero gets everything right, and there are lots of neat bungling Gungans in it. And they don’t curse at all either. At least not in English. As a regular movie that I went to see to be entertained, I give it only 6 bugs. The Matrix was much better. Maybe I’ll change my mind when I see it a second time, plebian that I am. But for now, it gets only 6 bugs. The annoying factor was just too high.

I have no quote for you. I’m very sorry. Actually, I’m going to quote John from the message he sent me about the new Star Wars movie (which is where I got any actual Star Wars related facts that you may have read in this review). It’s not fall down belly laughter, but it’s topical and relevant…

“Look, go see it again, I’m tellin’ you. Your opinion might not change, but at least you’ll be sure you really do hate it.”

That’s actually how I get stuck in so many relationships.