Review of Zombieland
So many friends and critics told me I had to see this. So I finally did, despite the fact that it’s called Zombieland. And holy shit, it was funny. 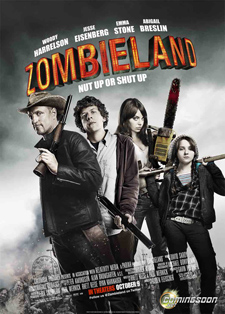 I don’t know what America’s obsession is with zombies. The term “critically acclaimed” should never be used to describe a TV series about zombies. Thriller perfected the use of zombies. They danced. They moved weird. They wore red leather jackets with too many zippers. They should have been retired after that. But much like crotch-hugging bell-bottoms, zombies are back in style.

But Zombieland knew what it was and didn’t take itself seriously, as evident from the opening credits. And now I know where Jesse Eisenberg came from. He is hilarious in this movie. Woody Harrelson was also hilarious in this movie, but he came from a bar in Boston and I already knew that. I could watch the scene with Bill Murray every day until I die and it will still make me laugh. Well, if I die in the next couple weeks for sure.
Also, Emma Stone is in this movie and that’s worth mentioning.
I hate zombies. I have a thing against them that I can’t fully explain right now, but I’m guessing it’s because I don’t like gratuitous horror movies and zombies are largely featured specifically just to add gore. But with Zombieland, much like a Mind Eraser, you have to get through that initial gag reflex and the taste of turpentine and it turns out the drink is pretty damn good. And you can never go back into certain Jacksonville night clubs again. 8 bugs (out of 10)