Well, I’m going to critique a less controversial film this time. If there are any die-hard Election fans out there, please turn your eyes away now. 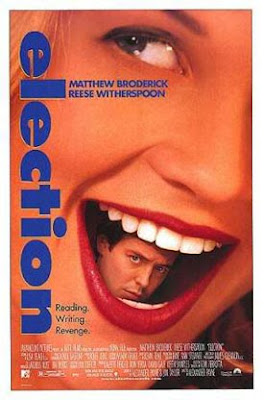 I’m afraid to give anything a bad review anymore, but I figure any movie produced by MTV is a safe bet. Maybe I’ll do Joe’s Apartment next week.

Anyway, here are the basics: This supposedly attractive (Reese Witherspoon), meticulously stubborn teacher’s pet-type runs unopposed for class president until her spiteful, annoyed for a reason (Matthew Broderick) teacher and guidance counselor of some sort convinces the out of commission, everybody loves you high school quarterback (some Keanu Reeves look and act-alike) to oppose her, accidentally causing his younger lesbian sister (some dike) who just had her girlfriend stolen by the aforementioned quarterback to run against him in order to think she’s getting some sort of revenge. And that’s just one plot. It’s got teachers having sex with students, blackmail, extortion, and no real hero. Every time you thought you found some moral compass, they changed direction on you. Actually, I liked the movie in spite of myself. There wasn’t much to it. They’re most expensive “special” effect was an overhead camera zooming out fast. The story was well written, with too many twists and turns to possibly be able to be predicted. And even when you predicted one, you enjoyed seeing it happen. It was simple. It was cheesy. But it worked. And it was damn funny. It’s only problem was that it has a couple of different codas after the main story ends, and I always hated that. It’s like watching the end of a basketball game that your team won by 25 points. You are forced to stay in the theater even after you’ve climaxed and had your deep breath and optional cigarette (can I cram any more analogies in here?). I think half the theater already started putting their jackets on with 10 minutes left in the movie. But this is admissible if it is the only flaw in the film. I am going to give Election 7 1/2 bugs. It was really good for what it was. It just wasn’t an 8 bug movie.

This quote is hearsay, but I do accept such quotes, especially when I am low on fuel. My sister apparently has a friend with a convertible Mercedes and lots of other cool toys. Char (aforementioned sister) was given the right to drive the vehicle and used this opportunity to show it off to the family. She pulled up to the video store and my mom was standing outside. Char turns to my mom and addresses the question…

Slightly better than the ’79 wheelless 3 shades of green Maverick that’s been in our parking lot for 2 years.