Hey guys. Did you see what I just did there? I did that thing where I don’t do a quote for a few weeks at a time. 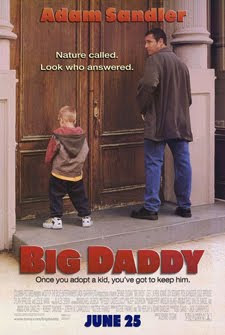 I apologize, but I fell for somebody and I’ve been spending all my time with her the past two weeks. She’s almost 8 and she can do the 10 string double helix looking gimp thing. And she’s a redhead too. I’m sure you guys understand. Actually, I hope you don’t.

I owe you all a movie review. I went to see Big Daddy the weekend it came out. Now I’m not a huge Adam Sandler fan, but I liked Happy Gillmore and Waterboy for what they were worth. They made me laugh a lot and that was all I expected from them. That was also all I expected from this film. I read a preview by a critic on all the movies that were supposed to come out this summer. His entire comment on Big Daddy was “Adam Sandler raises a kid. What, you need more? I’m betting he makes some faces and uses funny voices. God save us all.” What I got was a lot more. It wasn’t a typical Adam Sandler movie. Don’t expect Billy Madison. This film has a good storyline and a few sad parts. It was probably as close an equivalent as Adam Sandler will get to a Truman Show role. I wouldn’t go so far to say he was a good actor when it came to the sad parts. In fact, it didn’t even seem at times like he was trying to act. Like it would ruin his reputation or something. Anyway, my point is that the film is very good on many levels. Don’t get me wrong, it was very funny. Just not your typical silly funny that his films are famous for. And the kid in it steals the show for the most part anyway. He was absolutely great. Even better than the Jerry MacGuire kid everybody loves so much. And leaps and bounds better than young Anakin. Tony keeps telling me that he doesn’t see how a kid Anakin’s age could have done a better job. Well, this kid will make you notice. His voice cracks when appropriate and his emotions seem genuine. Of course, he does spend the movie playing Octopus Tag as opposed to fighting the forces of evil from a space pod. I guess his job was a little easier, but he was still much better. Overall, I give the film 8 1/4 bugs. Not quite The Matrix, but a little better than
The Mummy. You might want to take a bug or two off of that if you don’t like kids as much as I do.

This quote came from one of those orientation things where all the potential freshmen come to a pool party and Stryker and I take turns hitting on the 17-year-olds. Well, Steve showed up and brought his quick wit with him as usual. Lauren and I had been talking about gimp before he showed up, and when he walked into the conversation, she was just asking me if I could remember to get her some of “that stuff” for tomorrow. Steve asked what “stuff” she was talking about. I told him she was talking about me stealing gimp from our art supplies for her, to which he responded…

Back again and tired,