Review of the Wild Wild West

So Hollywood spared no gimmicks with this flick. They combined the 5-year old 4th of 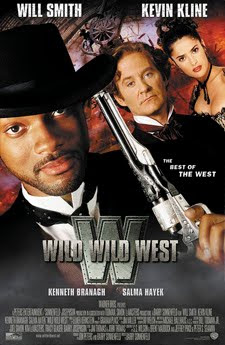 July Will Smith action/adventure release with the recent fascination of remaking old 60’s sitcoms. Throw in an older, respected actor, a gorgeous babe, and a never-ending slew of computer generated gadgets. How can this go wrong? I’ll bet that’s what the filmmakers are asking themselves right now.

Before I tell you how I feel about the film, I need to give you a dissertation on the term “suspension of disbelief.” Suspension of disbelief is a talent. And it is an important one to have in order to enjoy this film. And do you know what helps you out with your SOD? A barrage of people telling you that the film sucked. I walked into the theater ready for the film to be the worst possible thing I’ve ever seen. Not one person, even a child, told me it was good. Respected friends told me not to waste my money and I’d be better off buying the new In Sync CD. I had also seen the previews and recognized the 80 foot long mechanical tarantula. Right then, I knew this film wasn’t going to necessarily be historically accurate. The president’s name was Grant and railroads were popular. Don’t expect to go into social studies and bring up any more relevant facts about the old west that you got from this movie. I enjoyed this movie, even though I was supposed to see American Pie, but another alleged friend (I’m never going to try to watch a movie I want to watch with Good Joe again) screwed up the show time. If you remember your QOTD history, you’ll probably recall that I started using the bug scale after unsuccessfully trying to see A Bug’s Life in the theaters 3 times in a row. If I don’t get to see American Pie the next 2 times I try, I may have to institute a pie chart scale of some sort. But anyway, WWW had its moments. The action sequences were decent (though almost always impossible and a bit silly at times), and the witty one liners were mostly cheezy, but there were a few good ones in there.

And the special effects were good too. Not quite Jurassic Park or Star Wars, but they were good. Don’t get me wrong, I thought the movie sucked. I just said that I enjoyed it. I don’t recommend it to anyone and I probably won’t watch it again, but if you get locked out of every other movie, you can watch this one. First of all, let’s start with Jim West. The character’s name is West and that’s where they are. An allegedly clever play on words. And he’s black. He wasn’t black in the TV show. But it’s Will Smith. The man has no rules. He sings, he dances, he does sitcoms, and he stars in a blockbuster action flick that gets released every Independence Day since… well, Independence Day. So after such a long string of successes, one flop is excusable. What is inexcusable is that Kevin Kline decided to be in this film. I am quite positive he never read the script. Probably still hasn’t. He probably fired an agent over this mockery of his reputation. The usually reliable Kline comes across as corny and over the top. I finally understand now why Salma Hayek isn’t in more movies. She is very nice to look at but has limited acting ability, and I think that is a very generous assessment. There was also no reason for her character to be in this movie. The formula for a blockbuster film has traditionally had an element of a love interest in it somewhere. I would be willing to bet that whoever wrote the script added her character in it after he or she was finished with the entire thing. Same with Godzilla. Actually, I’m pretty sure Godzilla never had a written script. And Kenneth Branagh did fairly well as a legless evil scientist, and whatever he had going on on his face this film worked for him. But if you can’t pull off a southern accent, don’t try. All in all, I give the obvious product of a Hollywood Blockbuster equation 3 bug pies. I think that’s my new lowest rating of any movie. I didn’t even bother to go into all the plot holes there were in the film. “Oh, hey, look. It’s my other tool kit. They must have forgotten to check my pockets when they searched me.” If you do go see the movie, at the end of every scene, do your best to try to forget what you had previously seen. Watch this movie from scene to scene, not as a whole. Maybe that will help. Or go get that In Sync CD.

I’ve noticed a direct correlation between how much I dislike a film and how long my review is. Thank God I started doing these after Godzilla came out. I’d already have developed carpul tunnel syndrome. On the topic at hand, Meawad was telling me and Tony that Kevin Kline turns down possibly more movie offers than anybody else in Hollywood. In fact, he’s gotten the nickname “Kevin DeKline” for his pickiness. I contrasted this lifestyle with Kevin “Bring Home the Bacon,” who averages at least 3-4 bit parts in movies per year, to which Tony said…

“Do you think he feels obligated to connect himself to all the new young actors coming out today?”

“If you don’t get me on an episode of Dawsons Creek, I’m getting a new agent!”