American Pie is a documentary about my high school life. The names Mike, Kevin, Good Joe and Dustin 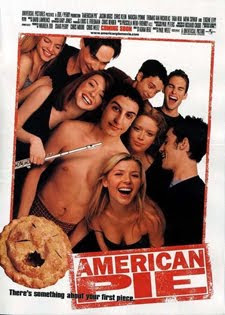 were only changed to protect the not-so-innocent. They changed the ending a bit, and improvised with the middle, but other than that, they kinda hit it right on the nose. I haven’t checked the list thoroughly, but let’s just say that odds work as they should and agree that half the people on this list are males, and I’m pretty sure you’ve all gone through high school by now too. They say that guys think about sex about 95% of the time. They’re wrong. Those times that we were thinking about sports or college, we were just thinking about how to impress chicks so we’d get laid. Candy coat it however you want to, but facts are facts. And speaking of facts being facts, the movie also points out that the decision is ultimately up to the girl. So if they determine when it starts, it’s only fair that we determine when it’s over.

They didn’t really touch upon that in the movie, but they touched a lot of stuff, believe you me. This movie stars nobody you know except for Eugene Levy and you won’t even remember his name next week anyway. Everybody in it is funny. The characters all have character to the point where I found myself scrunching down in my seat and covering my eyes in embarrassment for them many times over in the film. You find yourself rooting for them. You want some to win, you want some to fail, but you want them to do it. And I don’t recall a pause in my laughter. I remember different degrees of it, but this film kept me laughing all the way through it, the car ride home, and a few days into day camp. But here’s a tip: Don’t go see this film with your younger sister and her boyfriend. Or your girlfriend and your mom. Or your mom at all. Lots of people will be too uncomfortable to laugh about that stuff around the wrong people. And you need to laugh out loud. So go see it, but only with close friends. Or your girlfriend (if you’ve been dating for long enough for the sexual tension to be gone). Worst comes to worst, go see it by yourself. You can wait for it to come out on DVD too, there are no big screen special effects or in stereo musical scores you’ll be missing, but you will be out of the loop for 9 months. I’ll give American Pie 9 1/2 bugs. Half a missing bug because it didn’t do anything innovatively special like have an ant and an unlikely tube sock full of circus bugs make a bird to scare away grasshoppers, or make me remember my own mortality. 9 1/2 remaining bugs because I haven’t laughed so hard at something besides Russ’ dating career probably ever. It was even better than Something About Mary. I rode home with Flynn and Good Joe and neither of us could stop laughing or talking about the movie…

“Gee. My dad comes home everyday about this time. Hey, I have an idea. Why don’t I fuck a pie!!”

Hey, at least you didn’t broadcast that over the internet.

It’s All About the Pentiums…