Review of The Blair Witch Project

So what did Mr. Critic/Cynic think of The Blair Witch Project? Well, I didn’t know (because I chose not to) the 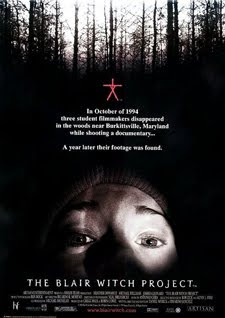 background of the film going into it. I didn’t know if it was real or fake or what exact degree of in between it was. This movie definitely had me confused as to what to think of it going into the theater. I had heard from generally respected people that it was really the actual footage of the kids that died edited by whoever found it, that it was a reenactment of their footage, and that it was completely contrived. I also had people tell me that it sucked, and I had others tell me they were so scared that they wouldn’t ever go into the woods again. I didn’t know what to expect. The fact that it happened in my own backyard also didn’t phase me. But that might have been because I saw it in Jersey. But I doubted.

So what did I think of it? Horror isn’t really my forte, and The Faculty didn’t really have me wetting myself. So I was looking forward to being scared. It never happened. Maybe I’m just a rock, but I didn’t flinch once. I kept waiting for the climax to happen, and right when I thought it was finally about to, the credits came on. They didn’t really scare me either. So I didn’t think it was all that scary.

But was it good? Whatever it really was (which I now know), it was billed as the alleged actual footage of these 3 film students. They did a good job of making it look like a student film. Which is very easy. I have about 7 to prove it. I felt a few of the parts were a little to contrived, but mostly believable if you’re willing to suspended your disbelief. But that’s a kinda redundant sentence. I have problems believing that they went in a complete circle over the course of an entire day. My biggest problem is the fact that they would have thought it was a good idea, or at least worth their while to film and videotape themselves running away from the witches, ghosts, hermits, or whatever they were. I was a film major, and even I understand that there are times when you just put down the camera and run for your freakin life! But there are a few people I used to go to class with who would probably keep the cameras running through all that crap. Of course, these are the same people who would probably get off on being killed by a witch. But overall, it gave me the feel of a real student project. The characterization was very good, and the actors (yes they were) were also very good.

So overall, what did I think of it? Let me examine a few aspects of filmmaking which determine a film’s worth. All in all, I didn’t find it very entertaining. It wasn’t scary to me, which pretty much makes it fail as a horror. There were a few funny parts in it, but there are probably more funny parts in whatever we would have decided to do instead. It also wasn’t informative like JFK or Roots or anything. It was, however, very original. But that doesn’t mean I have to like it. I’ll give it 2 bugs, and that’s all for the hype that this little experimental film managed to accumulate on a budget that could probably go into the budget of the pod racing scene alone about 300 times. It was a good attempt, but not a successful one in my eyes. Wait for it to come out on video. You won’t be missing any special effects. Hell, they didn’t even use up the entire screen.

Carl, a ghost of rowing past that has been sited on the quote of the day few times years ago, stopped in and had a long talk with me about life, The Blair Witch Project, and proper techniques to herd cattle. He was letting me in on some of the background of the film. He had a pretty convincing argument that it was a completely contrived scenario. The whole “filmed on location in Patapsco State Park” was a convincing argument that it wasn’t the original footage. But he was also telling me that he thought it was completely made up…

“Well, they’ve had interviews with the girl that it was supposed to have happened to. Like she was on Letterman and everything. So I assume she’s not dead.”

But is that REALLY proof? I mean who watches Letterman anymore anyway?

Living in fear of student films,