Review of Super
I’m not sure where this fell in the recent steady stream of make-your-own superhero movies, but there’s unfortunately no way it won’t ever be looked at as anything other than the younger, uglier, low-budget brother of Kick-Ass. 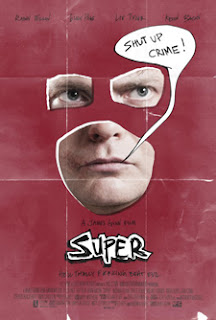 That’s not necessarily a bad thing though. Rainn Wilson gives the movie a farcical tone before the DVD even comes in the mail. And it doesn’t take long to figure out this isn’t trying to live up to Kick-Ass either. The entire movie was shot with handheld cameras, they reinvented the jump cut and even the costume screamed “Sundance.” And I did mention that Rainn Wilson is the star of the movie, right?
You can pretty much guess the first act – loser guy loses his girl, gets mad at the world, dresses up like an idiot and decides to stop crime on his own. Slight wrinkle – he bashes people’s heads in with a wrench. Violently. As if there was another way to do that. I didn’t see that coming. Ellen Page works at a comic book store and wants to be his sexy, foul-mouthed sidekick. She is adorable, as usual. I may or may not have a crush on her which may or may not affect the buggage of this movie. Kevin Bacon also makes an appearance to make sure he can connect himself to the younger actors.
The movie had some fun moments, in spite of the wrenching fight scenes (pun intended). Bacon’s death scene had surprisingly decent social commentary, followed by Rainn’s epilogue, which was also quite moving. You know, for a Rainn Wilson movie. I found myself describing the movie as absurd, but not ridiculous. That’s how torn I am about this movie. I’m making shit like this up. 5.5 bugs (out of 10)