Double Feature Duel:
The DC Quadrant
It’s finally time. The last of the 64 movies have been viewed and vetted and voted down to 8. And there’s already a new biggest upset ever with a 0-bug film actually advancing to the Round of 32 (0-bug Tree of Life defeated 5-bug Limitless). This system is definitely broken. And I finally got around to watching some Oscar nominations in this quadrant, but they only brought the QBA (Quadrant Bug Average) down, with the three of them only averaging a 3.83. Go figure. Not really a strong year for the Academy.
Well, let’s get this party underway because I’d rather spend my time writing to my unborn daughter than spending time doing on this hair-brained exercise to help me get inspired to write that I came up with shortly before I got married last May. Jeez.
And in “We’re cancelling the show you’ve already recorded 4 episodes for” fashion, I’m just going to post all these up here right in a row at a time that only the smartest DVRs will be awake to catch. 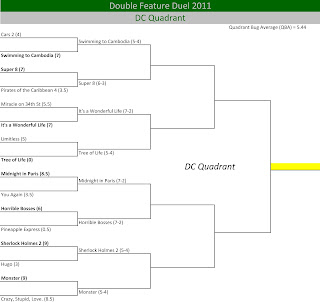