Review of “Unbreakable”
I haven’t done this in maybe 6 or 7 months, but I used to do a movie review every Friday. Now that I’ve found out 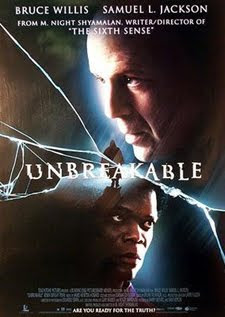 that we get free pay-per-view for some lucky reason, I don’t think I’ll run out of material. Anyway, I saw the new M. Knight Shyamalan flick with Bruce Willis that might as well have been the sequel to Sixth Sense. It’s not a sequel, in case I’ve confused anyone, but I was looking forward to a really good movie again, being as though these two teamed up to make my favorite movie of all time last year. So I went in with impossible expectations. Here’s what happened:
I liked it. A lot. But I can’t tell you why. I can’t really tell you anything about the film without giving it away. It can be slow and plot developing in parts, but it’s worth not sleeping through those parts to watch the other parts make a lot more sense. A lot of you will like it and think it’s really awesome. A lot of you will be bored and probably not get unbored. But I can’t say anything about the film without letting one or two cats out of the bag. The trailer, which is pretty much the first 5 minutes of the film, sums it up pretty good. Train Wreck. Everyone’s dead but Bruce. He’s miraculously unharmed. Samuel L. Jackson has a bad haircut. Weird.
I still recommend you all see it. I saw it the first two nights it came out and I’m ready to go again. In fact, I’d be willing to buy the ticket of anyone who wants to go see it again. However, I would require that you buy my ticket. I’m not made of money. I guess that would be like going double dutch. Anyway, the film is still awesome, possibly perfect, but not quite worthy of extra buggage (Sixth Sense got 11 bugs). I am, however, giving it the full 10 bugs. Oh yeah. It’s that good.
I don’t know if I ever told all you people this, but when me, Mike and Kevin travelled across the country, Mike and I wound up picking up chicks on two separate occasions. Well, Kevin was becoming antsy and insisted that the next chick we meet, he should be allowed to have first dibs on her, because it was “his turn.” Well, he’s married now. We were joking about that on the phone the other day about how he finally got a turn…
Quote Of the Day 11/8/00